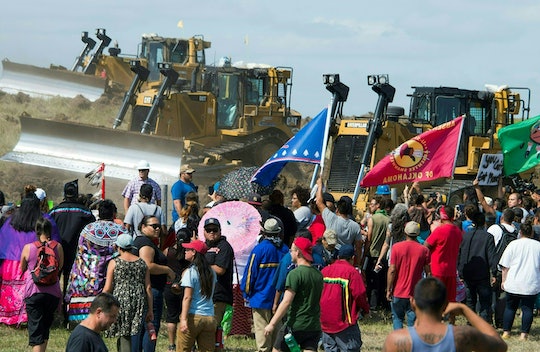 The Army Corps of Engineers announced on Sunday that it will not grant an easement allowing Energy Transfer Partners to drill under the Lake Oahe section of the Missouri River, according to The New York Times. Now that the Standing Rock Sioux have won their battle (for now), potential alternate routes for the Dakota Access Pipeline will be explored. But are the alternates any better than the current proposal? The Standing Rock Sioux opposed the pipeline for a number of reasons: first and foremost, in the event of a leak, the oil could contaminate their water supply. The plan also called for the pipeline to pass through disputed land that's sacred to the tribe, including burial grounds.

A map by the Times highlighting areas of conflict along the pipeline, which is more than 1,000 miles long, shows that the plans call for it to cross hundreds of other bodies of water, as well, including more than 20 that must be drilled under. And the Standing Rock Sioux aren't the only ones with claims to the land the pipeline crosses; it also passes through other tribals land, and hundreds of parcels of land have been seized from individual citizens under eminent domain, some of whom have sued.

In a statement published Sunday, U.S. Assistant Secretary of the Army Jo-Ellen Darcy said that "consideration of alternative routes would be best accomplished through an Environmental Impact Statement with full public input and analysis." An EIS was never conducted for the original pipeline plan, and the Washington Post reported that the Army normally doesn't require a detailed EIS for pipeline construction, opting only for assessments of the environmental impact on water crossings. The lack of an EIS was one of the Standing Rock Sioux's original complaints. What some might not realize is that the passing through Standing Rock was not the original route; earlier plans for the DAPL to pass just north of Bismarck were quietly scrapped over concerns for that city's water supply. As Public Radio International reported, the citizens of Bismarck are 92.4 percent white.

While the original Bismarck route may be considered among other alternatives, there is still a chance that the pipeline will end up going through Standing Rock, after all. The Army currently answers to President Barack Obama for the time being, but once President-elect Donald Trump is inaugurated in January, he may very well instruct the Army to seize the land. Trump stated last Thursday that he supports the construction of DAPL, according to Mother Jones. It should be noted that Trump has a financial stake in the pipeline, and Energy Transfer Partners previously donated $100,000 to his campaign.

Trump's campaign has not responded to Romper's request for comment regarding this clear conflict of interest, but Trump's transition team did issue a statement that said his support "has nothing to do with his personal investments and everything to do with promoting policies that benefit all Americans," according to Reuters. It continued, saying "Those making such a claim are only attempting to distract from the fact that President-elect Trump has put forth serious policy proposals he plans to set in motion on Day One."