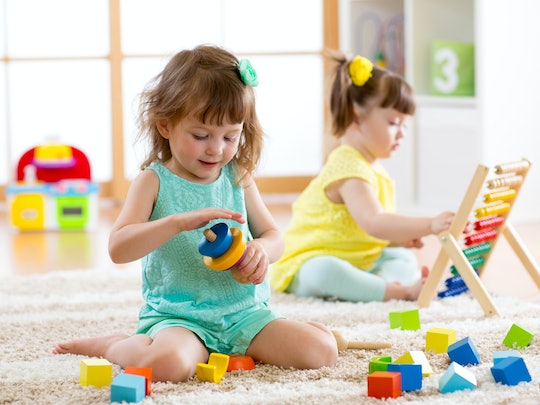 Picture it: you have a recently potty trained toddler and they've been clean and dry for an entire month. Great news. You can now enroll them in the day care closer to your work which accepts kids as soon as they're potty trained. Only, once they're enrolled, they begin having accidents. Lots and lots of accidents. A week into their new day care and you've started getting calls from the administration. Your child doesn't seem potty trained at all to them, and you're scrambling. You're not alone. It turns out that potty training regression at day care is a real thing, and there are ways to cope with the problem.

According to the American Academy of Pediatrics (AAP), any change in life or routine can lead to a regression in potty training habits. That means that a new day care, or even a new teacher or classroom, could lead to a short-term self-regulatory regression period where adjustments might have to be made and new standards established. It's normal, and normally no cause for concern, as per the AAP's recommendations.

The AAP noted on potty training regression, "Far from signaling an emotional problem, regression can actually be a healthy way for a child to meet her emotional needs at a time when life feels overwhelming." However, they don't write specifically about how it can really screw up your day care arrangement.

I remember when my daughter started pre-k and she would hold her pee until lunchtime or until she got home. She told me that she didn't want the other kids to know that she was going potty. (They had a bathroom adjoining the classroom.) Therefore, she had many a near-miss accident and several actual accidents trying to rush to our bathroom at home. I talked her through it, explaining to her that everyone has to go to the bathroom sometimes. We discussed how most of her peers would head to the bathroom at some point during the day, and it was completely normal. We read Everybody Poops, and in a hilariously misguided attempt to make her laugh, I may or may not have let her listen to Adam Sandler's "Longest Pee."

I spoke with preschool teacher and former day care provider Rebecca Greenbaum of Newark, New Jersey, and she tells Romper that what my daughter went through isn't uncommon in the slightest. "Every year we get a few kids that get tripped up by training at day care. It's not their house, the potty isn't Elmo-shaped, and I'm not their mom or dad. They're not as comfortable at school as they are at home, and it can have messy results. If they're learning to train while in day care, it can be a little bit easier. In that case, the parents and I are a team from day one, and your child gets accustomed to the situation faster," she says.

Eventually, my little one caught on. It took several weeks and many a pee pep talk, but she got back into the swing of things. It's frustrating for a parent, but it's also hard on the child. They've developed this one way of doing things, and suddenly, they're losing control again, so they choose to control their own world in the ways that they can.

The University of Michigan's researchers noted that potty training regression is just a thing that happens. Researchers wrote, "Many children refuse to train and may regress at any point in the training process. View this as a temporary setback and avoid shaming or scolding the child. Continue to base your training on encouragement and praise for a job well done."

Not getting upset can be hard, especially in situations like day care arrangements that are often contingent upon your child's ability to control their bathroom habits. The AAP has suggestions for how to get your child back on track if you notice them beginning to slip. "Explain to your child calmly but clearly that you expect her to continue her toilet-training efforts as much as possible, even now. Let her know that you are fully confident that she will get over this hurdle." The AAP also suggested reward charts, positive praise, and just giving your child time to adjust.

If the regression continues, or you notice them beginning to lag behind in other areas, talk to your pediatrician. They can help you better evaluate the situation and figure out the best way forward. Remember moms, everybody poops, some just choose to do it in their pants.