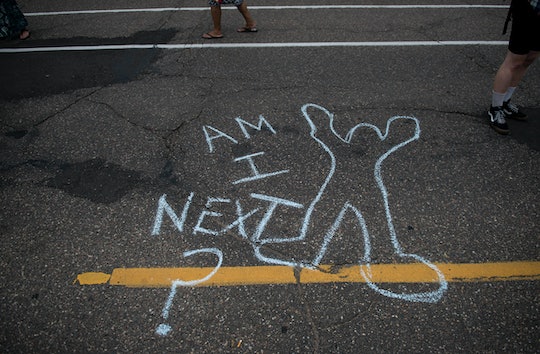 Powerful #AllLivesDidntMatter Tweets That Everyone Should Read & Understand

It's impossible to overstate the role that social media has played in the fallout of the recent bout of gun deaths in America. The tragic death of Minnesota resident Philando Castile at the hands of a police officer was live-streamed on Facebook by his girlfriend; The horrific slaying of five Dallas police officers by a hate-filled sniper was broadcast live over the social media accounts of the various witnesses. It seems somehow fitting, then, that the nation would struggle to make sense of these tragedies via social media, most recently with a mass of powerful #AllLivesDidntMatter tweets that highlight the importance and centrality of institutionalized racism in the deadly clashes that continue to define contemporary America.

The context of the trending #AllLivesDidntMatter hashtag is the ongoing Twitter battle between the #BlackLivesMatter and #AllLivesMatter hashtags. The former first appeared on Twitter in response to the 2013 acquittal of George Zimmerman, the neighborhood watch vigilante who shot and killed Trayvon Martin, an unarmed black teenager.

#BlackLivesMatter began as a hashtag, but it soon became the rallying call for a social revolution. According to the Black Lives Matter website, the movement, which was founded by three black women, "is an ideological and political intervention in a world where Black lives are systematically and intentionally targeted for demise."

In response to #BlackLives Matter, the #AllLivesMatter hashtag sprouted up, part of the nonsensical conservative stance that people who talk about racism are themselves racist. (Because of how racism doesn't exist, or something.) The #AllLivesMatter hashtag eventually came to represent opposition to the Black Lives Matter movement, which has substantially increased in recent days because the Dallas shooter, Micah Johnson, was targeting white police officers, according to The New York Times.

In the face of this continuing criticism against the Black Lives Matter movement, the #AllLivesDidntMatter hashtag seeks to remind the Twitter community of the myriad ways that particular lives have been singled out and robbed of human life and dignity in the history — including the very recent history — of America.

Tweeters used the #AllLivesDidntMatter hashtag to memorialize incidents where law enforcement used excessive force against black individuals, such as the 2014 slaying of Tamir Rice, a 12-year-old Ohioan who was shot and killed by police as he sat on a bench in a gazebo with a pellet gun in his waistband. The hashtag was also used to recount more general instances of systematic oppression against particular races, such as the Native American genocide.

As might be expected, hashtag highjackers entered the fray, seeking to undermine the #AllLivesDidntMatter hashtag by arguing that it's "racially divisive" to openly discuss historical instances of racial profiling and oppression.

Now more than ever, it's encouraging to see the continued power of hashtags that support the #BlackLivesMatter movement. This week, former New York City Mayor Rudy Giuliani told Fox News that the Black Lives Matter movement is "inherently racist" because "it divides us." Giuliani isn't the only one demonizing the peaceful movement; According to The Dallas Morning News, The Fort Worth Police Officers Association posted on their Facebook page that Black Lives Matter is "an organization that chooses to MURDER American law enforcement officers." The post was later deleted.

In the face of this type of opposition, the movement remains strong, online and elsewhere, remaining true to their stated goal of standing for love, justice, and human dignity.