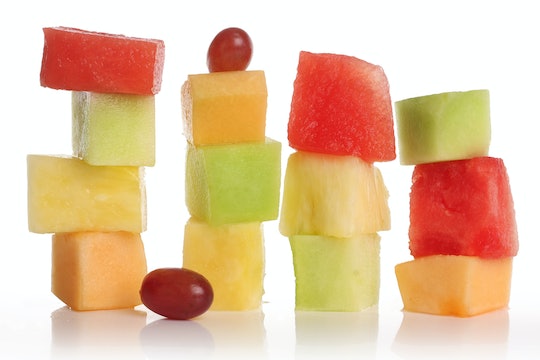 With school out and "cooking season" in full swing, it's a pretty good bet that families are chowing down on melon this time of the year. Because let's face it: Nothing cools you off, hydrates you, and hits that sweet tooth quite like some chilled and freshly-cut melon. Unfortunately, though, those living in certain states might want to hold off on this tasty summer snack/side dish for a bit. That's because pre-cut melon has been recalled in eight states for salmonella, and here's how to tell if you're affected.

So here's the lowdown. The Centers for Disease Control and Prevention (CDC) announced on Saturday, June 9 that it — along with the U.S. Food and Drug Administration (FDA) and public health and regulatory officials — are investigating an outbreak of Salmonella Adelaide infections. As of June 7, there have been 60 people infected from five different states, including: Six in Illinois, 11 in Indiana, 32 in Michigan, 10 in Missouri, and one in Ohio, CNN reported. Out of these known cases, 31 people have been hospitalized. So far, no deaths related to this outbreak have been reported. (Thankfully.) But the real question is: How I you know whether the melon sitting in my refrigerator is safe to eat?

As it turns out, the probable source of this salmonella outbreak has been traced to Caito Foods, LLC of Indianapolis, Indiana, the FDA revealed. Out of an abundance of caution, Caito has voluntarily recalled its pre-cut melon products — including watermelon, cantaloupe, honeydew melon, and fruit salad products — and it has halted production and distribution while the FDA continues to investigate. Recalled products were distributed in Georgia, Illinois, Indiana, Kentucky, Michigan, Missouri, North Carolina, and Ohio, the CDC reported. Products that have been recalled were purchased in clear, plastic clamshell containers.

As of Thursday, Walmart, Kroger, Jay C and Payless stores had already removed pre-cut melon products affected to the outbreak, CNN reported. So that's good news. However, consumers who have already purchased pre-cut melon from Walmart stores in Illinois, Indiana, Michigan, Missouri or Ohio are encouraged not to eat it, and to instead discard the product, the CDC advised. The same goes for pre-cut melon purchased at Kroger, Jay C, or Payless stores in Indiana or Michigan. Additionally, the melon was sold in Georgia, Kentucky, and North Carolina. Stores carrying the melon include Costco, Jay C, Kroger, Payless, Owen's, Sprouts, Trader Joe's, Walgreens, Walmart, and Whole Foods/Amazon.

If you don't remember the store from which you purchased your pre-cut melon? It's probably best to err on the side of caution and toss it. (Note: This advice from the CDC only applies to pre-cut melon and fruit salad mixes containing melon, not whole melons.) Right, so that doesn't really narrow it down much, does it? Thankfully, a complete list of affected products is listed in this handy chart provided by the FDA. (Heads up: It's a long one.)

In case you didn't already know, Salmonella is kind of a big deal. Individuals infected with Salmonella typically experience diarrhea, fever, and abdominal cramps 12 to 72 hours after infection, according to the CDC. This illness typically runs its course within four to seven days, and most people recover without treatment. Still, some people experience diarrhea so severe that they required hospitalization. Those especially at risk for complications include young children, the frail or elderly, and those with weakened immune systems. In extremely rare circumstances, a Salmonella infection can result in even more serious conditions, like arterial infections, endocarditis, and arthritis.