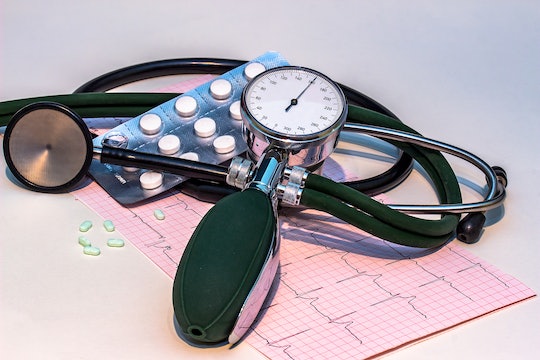 Could Your Blood Pressure Predict Your Baby's Sex?

Throughout human history people have come up with ways to predict whether a pregnant woman will have a boy or a girl. Nowadays, parents don't have to wait too long to have an ultrasound to find out, but now scientists are trying to make the prediction before a woman even gets pregnant. New research claims that a woman's pre-pregnancy blood pressure readings could predict her baby's sex.

A study published in the American Journal of Hypertension examined more than 1,000 women who were planning to get pregnant and took note of things like their blood pressure, cholesterol levels, and glucose levels. They also noted whether the moms-to-be smoked, how old they were, and their level of education. What they found was that the women who gave birth to boys had higher pre-pregnancy systolic blood pressure readings than the women who had girls.

As anyone who has ever been pregnant is probably aware, there are tons of "old wive's tales" that claim to predict whether a woman is having a boy or a girl. Before ultrasounds could visualize the baby's developing sex organs and let parents know, people came up with some pretty interesting ways to try to determine the baby's sex before birth. One that still gets a lot of traction today is that if you're "carrying high," you'll have a girl, and "carrying low" indicates you'll have a boy. Of course, throughout pregnancy the position of a baby bump shifts depending on the baby's position and how far along the pregnancy is.

This new research might not be an old wive's tale, though — and if researchers can confirm that a woman's blood pressure can influence (or give hints about) the sex of a baby, it could have major ramifications. In many countries, the pressure to have boys over girls is still astronomically high. Stress which could, of course, further elevate a woman's blood pressure and put her at-risk for complications like eclampsia.

While they caution that a woman's blood pressure is not likely to be a 100 percent reliable method of predicting a baby's sex, researchers hope the results of the study will help them unravel some of the enduring mysteriousness of human reproduction and physiology.

More Like This
Here’s What To Do If Your Baby’s Nose Bleeds After Suctioning
New Study Finds Brains Of Teens Who Lived Through The Pandemic Aged Faster
Can You Give A Sleeping Baby A Breathing Treatment? Experts Explain
Here’s Why Your Vagina Itches At Night, According To Experts