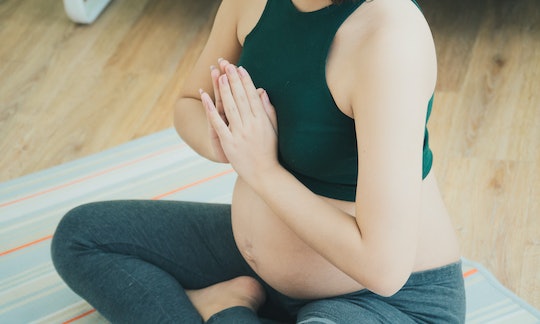 The Dreaded Under-Boob Chafing During Pregnancy Is Real, But Here's How To Combat It

Roughly three-quarters of everything that happens to a body during pregnancy could fall very firmly into the category of TMI. Burping, farting, pooping, puking, vaginal discharge, you name it. If it's gross, it's probably going to happen a lot while you're pregnant. One of the less discussed areas of feeling uncomfortable is the itchy, burning, painful phenomenon that is pregnancy chafing under your boobs. I was not prepared for this. You see, when I'm not pregnant, I'm a barely B cup. When I got pregnant? It was like an augmentation via estrogen. Before pregnancy, I had no idea I could sweat so much under my breasts.

The reason why so many of us have problems with underboob chafing during pregnancy is multifold. To begin with, your breasts change and shift, growing larger and heavier during the course of your pregnancy, according to Johns Hopkins Medicine. Also, during pregnancy, you have a tendency to sweat more than you do during other times in your life, noted Sports Medicine. On top of, or in this case, underneath all of that is skin that is increasingly sensitive due to the changes and variations in hormones that occur during the whole of your pregnancy, according to Everyday Health. All of these things combine in an unholy alliance that seems intent on the development of boob chafing. Thankfully, there are strategies to prevent the rough burns, and there are also good remedies to treat the sensitive skin once it has become inflamed.

According to Health.com, this is a ridiculously common problem. However, chafing under your boobs during pregnancy will require a bit of forethought for your day. To prevent this nasty little happening, you might want to invest in an anti-chafing gel. I have no idea why I never thought to use this beneath my boobs as I'd been using it under my arms during my long runs for years. I'm telling you, Monistat powder gel changed my life.

According to SweatyCheeks, a manufacturer of powders and gels for chafing, your best bet is to try to stay dry, clean the area frequently, and use powders or gels to lubricate the area so that the skin can slip back and forth against itself without causing the friction that leads to chafing and irritation. If you find yourself already chafed and irritated, my OB-GYN advised me to place cold, dry compresses against the area and keep it as dry as possible.

Mary L. Rosser, MD, PhD, an assistant professor in the Department of Obstetrics & Gynecology and Women's Health at the Albert Einstein College of Medicine of Yeshiva University, told the Bump that you should stay hydrated, dry, cool, use the gels or powders, and contact your provider if you're experiencing any other symptoms or feel like you need more relief. Personally, I sat in front of the air conditioner and held up my boobs while letting the air blow right on me. It wasn't cute, but it was bliss.

When I was pregnant, the chafing would sometimes get pretty bad. During my second pregnancy, I was training for the New York City marathon, which was scheduled for six months after my daughter was due in May. While my training regimen was fairly light, I suffered from chafing under my breasts, between my thighs, and under my belly. It was painful and led to me skipping more than a few runs when the mercury started ticking upwards. It seemed as though any sweat I produced would gather in those three areas, particularly beneath my boobs. And unlike my belly and my thighs, I wore a tight sports bra around my breasts, which did not improve the problem at all.

It actually wasn't until I was just a few weeks from delivering that I brought it up to my OB-GYN and found out that while it's completely normal, it can put you in danger of bacterial infections from the open sores. So it's important to try to prevent the chafing, or at the very least, treat it and clean it well as it occurs. Be sure to talk to your doctor if it becomes too much or you're worried about the amount of chafing. Trust me, this is a problem they've heard before.