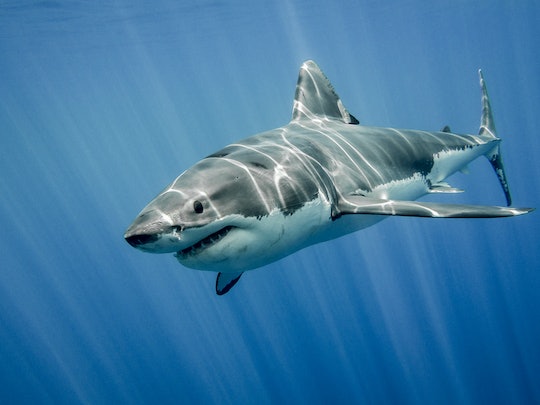 Here's What It Means If You're Dreaming About Sharks While Pregnant

While it might seem like you just watched one too many episodes during Shark Week, it turns out that water-based dreams are quite common during pregnancy. Dreams that involve swimming, standing, or drowning in the ocean are one of the six most common subject matters in preggo dreams, according to Hillary Grill, coauthor of Dreaming for Two, in an interview with Parents. These water-based dreams could have several different meanings: everything from you're thinking about your baby in the womb to, in the case of drowning, you're feeling overwhelmed, according to Grill.

Sigmund Freud, the master of dreams himself, also felt that their was a strong connection between water in dreams and birth. In Freud's book, The Interpretation of Dreams, birth is almost always represented by some reference to water: plunging in, climbing out, being rescued from or rescuing someone from it, reported Psychology Today.

But what does it mean if you're dreaming not just about water, but sharks specifically? Dreaming about sharks, whether you're pregnant or not, may mean that you have a greedy or fierce person in your life, according to dreamingandsleeping.com. The real kicker is that the "fierce" person can sometimes be yourself! Dreaming of seeing a shark, "is usually a symbol of your ruthless behavior, anger and fierceness in your waking life," the site explained.

If you're having really wild or disturbing dreams (and shark dreams certainly fall under that category), good news, there's an app for that. The iDream app says that sharks in dreams "represent formidable enemies or a person you see as greedy and cold." If I had to put my Freud cap on, having a shark dream while pregnant could mean that you're concerned — on a subconscious level — that you'll be a ruthless mother, or perhaps you're questioning your partner's parental instincts.

It turns out that anxiety-based dreams and even nightmares are common in pregnancy. "With pregnancy, you may find yourself under more stress or anxiety than you are accustomed, which could easily lead to more intense dreams or even nightmares," explained the American Pregnancy Association (APA).

Pregnancy causes your hormones to go into overdrive, which can disturb and interrupt your sleep, and even diminish your sleep quality, according to Psychology Today. And while you can blame your trippy dreams on hormones, there's a physiological reason that could explain why you remember them so well: When you're waking up more in the night — because you can't find a comfortable position due to that growing belly or you have to pee more frequently — your REM (rapid eye movement) sleep is getting disrupted.

"It is during REM sleep that dreams occur, and when the frequency or length of REM sleep is inconsistent or disrupted frequently throughout the night, it can impact how much you dream while you are pregnant," explained the APA.

If your dreams are really starting to freak you out — like a recurring shark dream understandably would — you might want to consider starting a dream journal. It may help you to jot down your dreams, according to Babble. And getting in the habit of dream journaling while pregnant might help you better handle disturbing "new mom" dreams once your baby arrives. One study found that new moms may continue to have bad dreams and/or nightmares for a while after becoming a new parent, according to Psychology Today. For tips on starting a dream journal, check out this interesting read.

Whether you're dreaming about sharks, water, or just plain giving birth, it can help to get it all down on paper. Someday you might even look back on those bizarro dreams and have a good laugh.