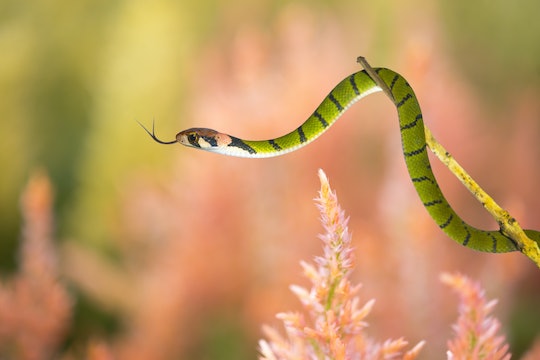 Here's What It Could Mean If You're Pregnant & Dreaming About Snakes

Pregnancy is exhausting, and a dream-filled slumber is most welcome welcome at the end of the day. Hitting the pillow after a long day of growing a baby, a pregnant woman can sleep pretty deeply. And what comes with that deep sleep? Often, very vivid dreams. Many people attempt to interpret their dreams, pregnant or not, and while there are as many interpretations for each symbol as there are dreams, pregnant dreams, especially, can be fun to try to figure out. So what if you're pregnant and dreaming about snakes? What does it all mean?

Hormones combined with anxiety can cause pregnant women to have some intense dreams, including ones with slithering snakes in them. The anxiety is not surprising: you're worried about the baby's health, your own health, and whether you can handle a job, kids, outside responsibilities, and then you worry about your baby's health some more. But why snakes? The obvious explanation would be something related to a penis as the snakes are phallic-shaped. Babble reported that snake dreams could be penis-related and they also could indicate growth and wisdom. As the penis is quite possibly what got you into the pregnancy thing in the first place, it wouldn't be surprising that thoughts of it, or anxiety about it, are bobbing around your subconscious and manifesting in your dreams.

Psychoanalysts have different views of why dreams occur. Sigmund Freud believed that dreams were reflections of unconscious conflicts, while Alfred Adler, another psychoanalyst, believed that dreams, "reflect current lifestyle and offer solutions to contemporary problems" according to the Sleep Foundation. Both of those could be echoed in pregnancy: You may be filled with many conflicts below the surface and again, you may also be thinking about the snake or the penis as the object that helped you get pregnant.

Besides the penis idea, there is a whole range of interpretations of snake dreams. You might even start dreaming of them before you find a plus sign on your pregnancy test. Some cultures believe that dreaming of a snake biting you signals you are pregnant, according to babyMed. Dream Dictionary Now said that snakes in your dreams can suggest that you are intuitive or that you're worried about someone in your life that you don't trust (hence the phrase, "snake in the grass"). Snake Dreams also agreed with the idea that your intuition is kicking it and that it could be warning that something (positive or negative) will affect your pregnancy.

Edgar Cayce, who was a psychic and medical clairvoyant in the 20th century, felt that the interpretation of dreams could vary depending on what the object means to the dreamer. He gave the example of one person dreaming about snakes to symbolize sex, and another dreaming about snakes because they had overcome their fear to work with the reptiles at their job and they felt empowered by that, as Jennie Taylor, Director of Marketing of Edgar Cayce's Association for Research and Enlightenment (ARE), described in the ARE's blog.

As a pregnant woman, if you are getting the right amount of sleep, you might not even remember your dreams. Dreams occur during the Rapid Eye Movement (REM) part of sleep. Psych Central described the REM stage as, "characterized by eye movement, increased respiration rate and increased brain activity." While this is happening, your voluntary muscles, like the ones in your arms and your legs, become paralyzed and you relax. With quality sleep, you come out of the REM cycle and into a lighter sleep before waking. If you wake in the middle of the REM cycle, you are more likely to remember your dreams.

The increase in progesterone and estrogen in a pregnant woman's body may also contribute to a decrease in REM sleep, according to Very Well, which is why your dreams may seem to be more vivid when you're pregnant.

No matter what you're dreaming about when you're pregnant, it can be fun to try to interpret all the symbols you see, even if you're just taking it all with a grain of salt.