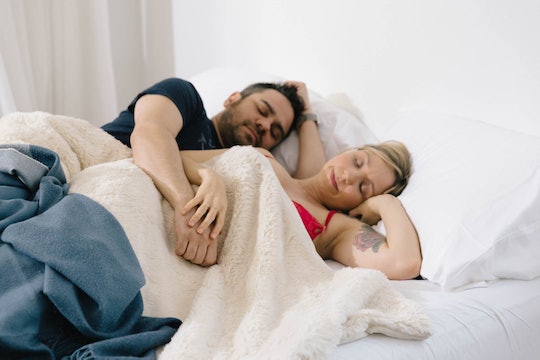 If You're Having Creepy Pregnancy Dreams About Spiders, Here's Why

Pregnant or not, I have the weirdest dreams. And perhaps the worst part of it all — at least for my patient, listening husband — is that I remember every odd detail and am prone to taking them quite seriously. (See: Waking up mad because my husband cheated on me in a dream.) Research says pregnancy-related hormones can cause a spike in these types of dreams and for many women that's exactly the case, whether they have visions of giving birth or the reoccurring one where they forget their baby at the supermarket. But what about pregnancy dreams about spiders? Could it be that they mean something other than the fact that they make you feel creepy, crawly?

Indeed it can, Lauri Quinn Loewenberg, a professional dream analyst, tells Romper in an email interview. In fact, their initial interpretation is quite literal. "Typically, any sort of bug in a dream is an indication that something or someone is really 'bugging you' in real life," Loewenberg says. "Spiders, in particular, tend to be connected to lies and deceit."

Loewenberg says this links back to the old saying, "What a tangled web we weave, when first we practice to deceive. So dreaming of a spider can mean you feel someone around you is not being honest or perhaps there is something you are not being honest about and it is bugging your subconscious."

Other, but less common interpretations of spider dreams, include the idea that a dreamer is feeling trapped or stuck, just as a spider uses its web to trap its prey, Loewenberg says. "In relations to pregnancy, a spider can also represent the mother-to-be's growing anxiety over the birth and all the responsibilities that come with it, as a spider can have hundreds of babies in her egg sac," she adds.

Other common pregnancy dream symbols include fish and water dwelling creatures, which are most common in the first trimester and symbolize the water dwelling embryo, according to Loewenberg. Don't be surprised if you also dream more frequently about your mother being that you are about to becomes a mom. "When she is a helpful character in your dream, it indicates you are feeling excited and positive about your pregnancy," Loewenberg says. "But if she is a harmful character, sick, or in danger, this denotes anxious or negative feelings toward your pregnancy or may be reflective of any complications you are experiencing."

Dr. Fran Walfish told Elite Daily that dreams about your mother should prompt you to ask yourself, "What is the nature of the relationship that I have with my mom?" Walfish pointed out, "Is it, for example, conflicted? Is it an overprotective relationship? Is it warm and fuzzy? Is it distant and disconnected? Is your mother controlling?" Take those answers and examine the relationships you're in right now — or the one you're anticipating with your little one — and "ask yourself where you feel a similarity," Walfish said.

And if you find yourself operating a large vehicle in your dreams, then it's just a hint at your changing body and how difficult it can become to maneuver your growing belly, Loewenberg says.

On the other hand, dreams that leave you rattled, like one that indicates you have caused physical harm to your baby or of the baby being born unhealthy are not what you think, even though they are quite scary. According to Fox News Health, these dreams are just playing out "your internal conflict about the amount of time you’ll have to devote to your baby."

But a few words of wisdom? Don't spend too much time worrying about what your dreams mean and, instead, just focus on scoring as much dream time (also known as sleep) as possible before your little one arrives.