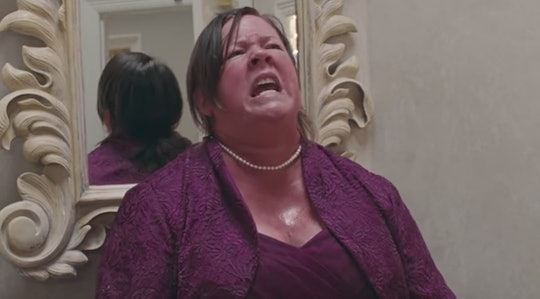 Pregnancy Hemorrhoids Are Hell On Earth, & We Need To Talk About It

If I had a dollar for every time I googled “pregnancy + X symptom + normal?” I would probably be very rich — or at least reasonably wealthy. The point is, there are a lot of things that happen to our bodies when we’re growing another human, some of which can be downright gross, embarrassing, and unpleasant — and we need to talk about these things more with each other, instead of always turning to Google for answers. So that’s why I’m going to go there. I have pregnancy hemorrhoids, and I'm gonna talk about them. Yep.

Hemorrhoids during pregnancy are pretty common. In fact, an estimated 25 to 35% of women experience them (and more in certain populations). The American Pregnancy Association (APA) notes that the likely cause of this unpleasant condition is constipation, along with prolonged standing in some cases. They also add that the “best thing to do to prevent hemorrhoids during pregnancy is to avoid getting constipated.” Right, OK.

Personally speaking, I’ve found that there’s really no limit to the amount of fiber I can add to my diet without still dealing with both of these ~struggles~. I’ve committed to eating several prunes a day, I drink liquids like it’s my job, and I’m constantly craving fresh fruit. Grocery shopping has become somewhat of a joke between my husband and I, becaue I will inspect every item’s nutrition label for its dietary fiber count. So what the hell, body? Why are you still making it so hard (literally) to poop?

It turns out that pregnancy in and of itself is just a recipe for constipation, which in turn is a recipe for hemorrhoids. Because of the increase in the hormone progesterone, a pregnant person's muscles tend to relax, including those located in the digestive tract, which causes food to pass through more slowly than normal. Of course, the growing watermelon-sized baby doesn’t help either, as there’s a ton of pressure all around the rectum. Fun times.

What the hell, body? Why are you still making it so hard to poop (literally)?

I feel like this is all just a big unfair cosmic joke. Pregnant women already have to deal with so many weird symptoms: shortness of breath, random aches and pains, difficulty sleeping, the constant need to pee, nipple discharge. I could go on and on. And on top of all of that, we also have to experience literal pain in our butts.

Luckily, there are some remedies out there that help. My doctor recommended Colace for dealing with constipation, as well as Tucks Medicated Pads for the unpleasant hemorrhoids. I’m not going to lie, neither problem is 100% gone — but both treatments are helpful for making everything a little more bearable in that area.

As a culture, I think we have trouble sometimes talking about things like this. And I’ll admit, I was slightly hesitant to write this article and share my bathroom woes with the entire internet. But at the end of the day, bodies are bodies — we all have them. Perhaps talking more about these unpleasant side effects of pregnancy will help pregnant women feel less alone, or less ashamed by some of the more personal details.

The more we talk about this stuff, the more we can help others realize that their symptoms are completely normal (which could prevent a lot of late-night googling and worrying). Not everyone has friends who have already been through pregnancy, so we all don’t have people we can text with “those” types of questions.

So to the women who are also dealing with painful poops and sore butts, I want you to know that you’re definitely not the only one. I also want you to know that there’s nothing to be embarrassed about, and it’s OK to speak up and ask for treatment to make yourself feel better. And if nothing else, know that all of these weird symptoms are finite — they won’t go on forever. There’s an end-date in sight, so stock up on those creams and prunes in the mean time and start your final countdown. This too shall pass.

More Like This
Banana Boat Sunscreen Has Recalled Products That Were Found To Contain Benzene
New York Can End Religious Exemptions to Vaccine Mandates, Says A Federal Appeals Court
How To Avoid & Treat Lyme Disease
Chrissy Teigen Gives a Cheeky Behind The Scenes Peek Into Her Pregnancy Glam Squad