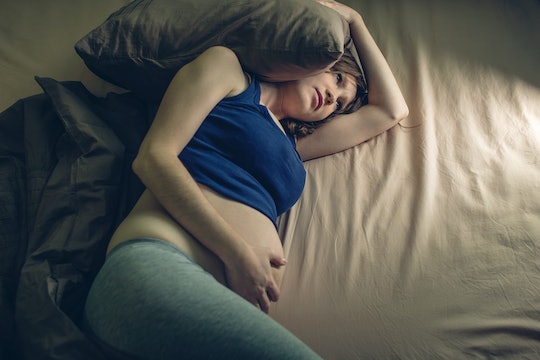 Pregnancy Insomnia Is Real & Hardly Anyone Is Talking About It

When I got pregnant the first time, I realized pretty quickly that growing a human is exhausting. I spent my first trimester falling asleep anywhere at anytime, including at my desk, on the couch, and, yes, even at a stoplight. I would fall asleep right after dinner and not wake up until my morning alarm. Then I hit my second trimester and everything changed, just not for the better. I learned the hard way that pregnancy insomnia is a real thing, a terrible thing, and a pretty common thing that numerous women experience during gestation. So, why aren't people talking about it?

My insomnia was particularly bad, and in many ways changed how I viewed my pregnancy. I would try to go to bed at a semi-reasonable hour, like you'd expect a responsible adult who was about to be someone's mom to do, I just couldn't fall asleep. Instead, I would find myself replaying my day in my head, worrying about my pregnancy, getting up to pee multiple times throughout the night, and generally feeling restless and overwhelmed and uncomfortable. I tried everything I could think of — lavender lotion, herbal tea, baths, pregnancy pillows— and I still couldn't sleep. What was at one point an annoyance became a substantial problem; one I had no idea how to fix.

Then I would play a game where I would calculate how many hours of sleep I would be able to enjoy if I managed to fall asleep right at that very moment. This was not a good idea at all, though, and just made me even more anxious, which, you guessed it, made my insomnia worse.

In my book sleep is life, and not getting enough sleep feels like absolute torture.

So, instead, I would stare at the ceiling and worry about what would happen the next day if I failed to get a reasonable amount of sleep. Or I would give up on sleep entirely and, instead, pass the time by searching the internet for solutions to my problem. The advice I found on pregnancy websites was confusing and inconsistent, though. I didn't know if it was safe to take something to help me sleep, or if it might hurt my still-forming fetus. So, I asked my midwife if medications were an option, and she said coldly, "There's no drug that's 100 percent safe during pregnancy." I awkwardly laughed at her emotionless response, thinking she was joking, but she gave me a look that let me know she was not, in any way, kidding around.

My midwife was right, technically. There are no medicines that are proven without a shadow of a doubt to be entirely safe during pregnancy. However, according to the Centers for Disease Control and Prevention (CDC), there are medications that providers generally consider safe during pregnancy, or for which the health benefits outweigh any potential risk to you or your baby. Mother to Baby, an organization that compiles information about medications in pregnancy, lists a couple of medicinal sleep aids that have even been tested for safety in pregnant women. I was hoping my provider would have at least been willing to discuss these aforementioned medications with me, but she wasn't, and as a result I remained in the dark.

You would think that with that level of prevalence everyone would be talking about pregnancy insomnia, and researchers, scientists, and health care providers would be serious about helping moms-to-be get some sleep.

She did tell me how important it was that I get enough sleep during pregnancy, though, which I already knew. In my book sleep is life, and not getting enough sleep feels like absolute torture. She then went on to suggest I try yoga. I love yoga. Hell, I teach yoga, but it did nothing for my pregnancy insomnia.

So, I continued to struggle with insomnia through my next two trimesters of pregnancy. My body hurt, my positivity was at an all-time low, and I was exhausted. Worse, I didn't talk about it because I thought I was alone. I wasn't, though. It turns out, according to the American Pregnancy Association (APA), 78 percent of pregnant people have insomnia. Their site goes on to say that you shouldn't worry about it, though, because it won't hurt your baby. But what about us pregnant, sleep-deprived, uncomfortable women who are unable to enjoy even a moment of reprieve? Don't pregnant women matter?

I think pregnancy insomnia, its dismissal, and the silence that surrounds it are all just another example of people dismissing women's pain, discomfort, and health concerns, and treating pregnant people like they aren't important beyond their ability to carry potential babies.

You would think that with that level of prevalence everyone would be talking about pregnancy insomnia, and researchers, scientists, and health care providers would be serious about helping moms-to-be get some sleep. But as I struggled to find an ounce of rest during my 40 weeks (more or less) of pregnancy, I realized that's just not the case.

I think pregnancy insomnia, its dismissal, and the silence that surrounds it are all just another example of people dismissing women's pain, discomfort, and health concerns, and treating pregnant people like they aren't important beyond their ability to carry potential babies. To make matters worse, insomnia can continue after your baby is born, and post-birth conditions, like postpartum depression and anxiety, can end up making that insomnia even worse. Not to mention the fact that having a newborn generally means even less sleep for you.

I think it's time my latest experience becomes the rule, not the exception, and that we collectively start talking about pregnancy insomnia with health care providers, our mom-friends, our partners, and other moms-to-be.

As I was struggling with pregnancy insomnia, people who had no idea what was happening would say unnecessary, unhelpful, and condescending things like, "You'd better sleep now, because once your baby gets here, you’ll never sleep again." While they arguably intended to simply poke a little fun at the impending trials and tribulations of new mom life, I can assure you that there's nothing "fun" about pregnancy insomnia, or worrying about how you'll possibly handle life if that insomnia continues postpartum. I started to wonder if you could actually die from lack of sleep. Nine years later, I can tell you that I'm still here, but I haven't really slept a full eight hours since before President Barack Obama was in the White House.

During my last pregnancy I was lucky to have a new OB-GYN who took my pregnancy insomnia seriously. We were able to figure out that my sleep issues were mostly related to anxiety. When I starting taking medications to help with my perinatal anxiety and depression, I was finally able to get more sleep.

It was amazing to have a provider who heard me, and was willing to actually have a conversation about pregnancy insomnia without making me feel like I was being selfish for wanting to try medication — or really anything — to get some rest. I think it's time my latest experience becomes the rule, not the exception, and that we collectively start talking about pregnancy insomnia with health care providers, our mom-friends, our partners, and other moms-to-be.

Considering that almost 80 percent of us don't get enough sleep during pregnancy, I think it's about time for soon-to-be moms to expect better when it comes to treatment options for insomnia. Growing humans is hard work, and pregnant people deserve to be able to get some sleep while they do it. That means we need sleep medications that work and are safe, healthcare providers who listen, and a society that doesn't treat pregnant people like their health and wellbeing don't matter.

If you have pregnancy insomnia, I see you. I'm here if you want to talk about it. My advice for you is to skip tea and yoga, and find a provider who takes you and your sleep seriously. You matter. Pregnancy insomnia is real. You aren't alone.