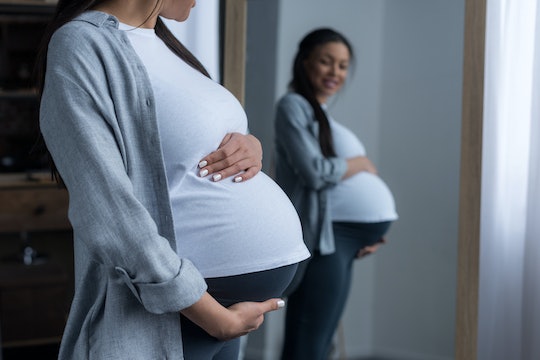 Oh It's Not Your Imagination: Pregnancy Literally Makes You Age Faster

If you’ve ever made a joke about your kids aging you … well, turns out it might not completely be in your head. Obviously, there are visible physical effects of pregnancy (Hello new boobs! Goodbye feet, see you in a few months...), but scientists are wondering: what about those effects that aren't immediately visible? A new study has found that pregnancy may be linked to accelerating aging — but there’s an interesting twist.

For the study, published July 23 in Scientific Reports, researchers looked at cellular aging in hundreds of young women with different reproductive histories. And what they found was pretty interesting. Researchers examined two markers of cellular aging (which is basically the decline in our cell’s ability to resist stress and to heal, explains the University of Montreal), and essentially found that pregnancy accelerated that rate of aging. With each pregnancy, cellular aging was accelerated by six months to two years. But, here's the twist: While a woman was pregnant, the study found that their cells looked younger.

"If a woman was pregnant when the measurements were taken, her epigenetic age — and to a lesser extent her telomeres — looked 'younger' than predicted for her chronological age," Christopher Kuzawa, professor of anthropology at Northwestern and lead author of the study told CBS Denver.

So, all those sayings about pregnant women having a certain glow about them aren't rooted in just myth or baseless compliments. Pregnant women are provided a sort of youth during their pregnancy, although, alas, the effect doesn't last forever.

This isn’t the first study to find that having kids, well, accelerates aging. As Newsweek reported back in February, another study found that having children makes a woman’s DNA look eleven years older than it should.

In their report, researchers share that they had concerns they'd be able to find any effects in women so young. Additionally, they acknowledge, the study examined only women in the Philippines. Although this means conditions specific to the Philippines may have affected the findings, it doesn't call for completely tossing out the relevancy of the results, either.

Studies like this are all part of an effort for scientists to better understand pregnancy and the complete effects it has on a person's body. In the past, researchers have looked into why having four or five kids can increase the risks of certain illnesses, but the answer is still unclear.

“Our study points to cellular changes during pregnancy, possibly related to adaptive changes in the mother’s immune system as a possible explanation,” Kuzawa told CBS Denver. “There’s still a lot we don’t know.”

Researchers are hoping to conduct a follow up study, so it will be cool to see if there are any shifts in data. But, for now, if anyone tries to downplay the experience of pregnancy, feel free to use this information to remind them: silencio.