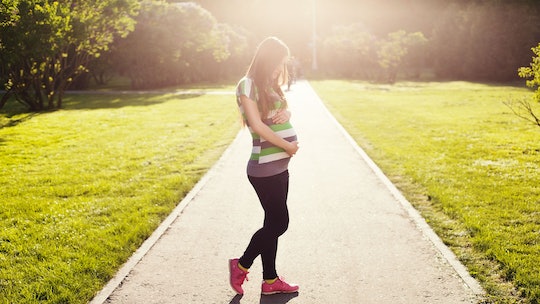 Since the dawn of time, people having babies have been familiar with the concept of "mom brain" or "pregnancy brain" to describe certain shifts that happen when someone becomes a parent. Big life changes plus hormones can make a new mom feel not quite herself. Now, science says those changes might last years. In fact, pregnancy might change a woman's brain permanently.

Pregnancy has always completely changed a woman's body and mind, not to mention shifted her priorities and center of gravity. But those changes haven't been regarded as permanent, at least not by science's standards. Certainly any new mom knows that just because the baby's born doesn't mean her body and mind go straight back to pre-pregnancy condition. While that seems to be the expectation of society, it's definitely not the reality for many women. Previous studies that seemed to prove that "mom brain" — the term given to the fogginess and memory trouble many new mothers experience — existed. Of course, that wasn't exactly seen as a positive side effect of pregnancy.

But this latest study shows that some changes in the brain after pregnancy might actually be for the better. The study, conducted at the Autonomous University of Barcelona, looked at the brains of 25 first-time mothers using Magnetic Resonance Imaging (MRI). They recruited the women before they became pregnant and examined the changes in their brain from conception to several years postpartum.

What researchers noticed was that, for new mothers, regions in the grey matter of the brain that help us perceive and consider the feelings of others were reduced. What was interesting was that it didn't mean new moms were having a hard time being empathetic: if anything, they seemed even more attuned to others' needs (directed mostly at their new baby, of course). Researchers think that the "shrinkage" actually reflects the fact that a new mom's emotional capabilities were just refocused, and intensified, toward her new baby. So, it wasn't that the new moms had less brain power, they were just using it in a more directed, purposeful way.

This isn't just seen in new mothers: "grey matter pruning" or "synaptic pruning," which is the term given to that apparently purposeful loss of grey matter, is also commonly seen in infants, children, and teens. Over the last few years, researchers have become excited about the prospect of the brain's neuroplasticity — or, its ability to essentially "rewire" itself over the course of a person's life.

Researchers found that moms who had the most shrinkage of grey matter in their brain also had the most successful bonding period with their new babies. This makes sense when you remember that early motherhood is an important time for bonding, and in order for the baby to survive a lot of the mom's focus and attention is given entirely to the infant's needs. In those early days, the pair take important cues from one another — especially through the use of facial expressions and sustained eye contact.

When researchers did follow-up MRIs on the mothers when their babies were toddlers — two years after the first MRIs were taken — they found that these changes hadn't reverted. It may be that those changes are actually facilitating the new mom's ability to bond with her baby and remain engaged in the tasks associated with parenting.

Of note, researchers also looked at the brains of new fathers in this study and found that men did not show the same grey matter changes, which seems to point to a biological function (which is probably influenced by the hormones of pregnancy) and not strictly a social one.