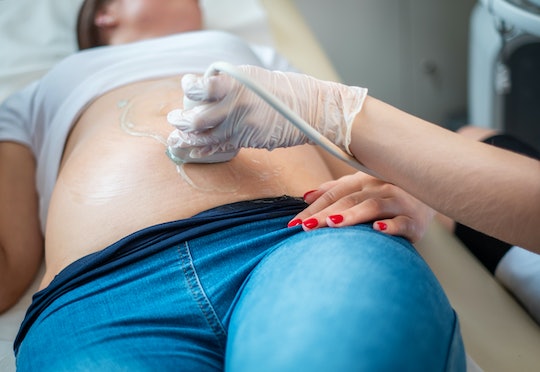 Yes, There Are Pregnancy-Safe Solutions For Vaginal Itch (Phew)

There's a seemingly endless list of pregnancy irritations that are as uncomfortable to discuss as they are to experience. Chief among these awkward maladies is vaginal itching. No one wants to walk around scratching their crotch, and no one wants to talk about it. But there are pregnancy safe solutions for vaginal itch (thank goodness) and there are more remedies available than you may realize.

Dr. Ronald Salzetti, Division Head of Obstetrics and Gynecology at Scripps Clinic in California, tells Romper that vaginal itching during pregnancy is fairly common, and is often tied to "the increased amount of vaginal discharge that happens during pregnancy." Combine the excess discharge with an expecting mom's adoration of leggings (which are comfortable, but not so breathable), and add all that on top of the increased allergic responses that come with pregnancy, and you have the recipe for irritation. Salzetti says that the first step of treating your scratchy vag is determining the cause of the itch. If it's bacterial, he says your doctor might prescribe something like clindamycin; if it's yeast-related, you'll be guided to use an over-the-counter topical product like Monistat or Vagisil, because oral antifungals like Diflucan aren't pregnancy-safe.

Thankfully, there are also strategies to help prevent the unfortunate circumstance of an angry crotch spot during your pregnancy. Dr. Aparna Sridhar, Associate Professor of Obstetrics and Gynecology at the David Geffen School of Medicine at UCLA tells Romper that the culture's collective obsession with stretchy pants and silky spandex underwear might be the impetus for the itch, and if pregnant people just switched to cotton underwear with maximum breathability (and stayed away from the leggings for a little while), things might improve for their uncomfortable undercarriages. "We encourage women to avoid synthetic underwear or tight pants and recommend loose fitting cotton garments," she says, adding that it's "best to use fragrance-free, pH-neutral soaps to the clean the area outside the vagina." Save the cucumber and lavender body wash for the legs and underarms, if you must.

If the vulva is already inflamed, Sridhar says coconut oil or petroleum jelly can be used for "symptomatic relief." However, if there's a foul odor, or if the discharge is discolored, you truly do need to consult your provider. Because at that point, Sridhar says that you are probably dealing with something bacterial or yeast-driven, and it will need closer inspection. Even if that is the absolute last thing you want to be doing.

Unfortunately, some people are simply more prone to yeast and allergic dermatitis in their downtown during pregnancy than others. Dr. Salzetti says it's likely some combination of luck and genetics that causes some pregnant people to develop more irritation than others. Just like morning sickness, Braxton Hicks, and stretch marks, irritated and angry vaginas are partly the unlucky luck of the draw.