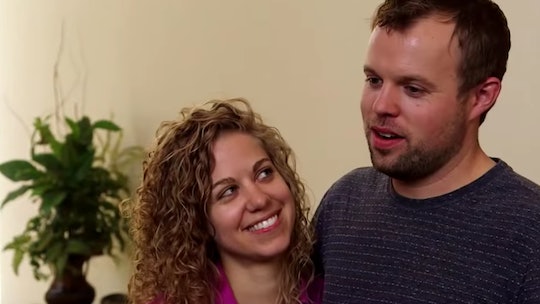 The Duggar family has always been an open book when it comes to their pregnancies, even when things don't go smoothly. From heartbreaking miscarriages, premature deliveries, and persistent nausea and exhaustion, viewers have followed the Duggar women through difficult times over the years. And another soon-to-be first time Duggar mama recently opened up about her rough pregnancy. As it turns out, John-David's wife Abbie Duggar was diagnosed with hyperemesis gravidarum and has understandably been struggling with the pregnancy condition.

As a refresher, John-David Duggar and Abbie (Burnett) tied the knot in November 2018, according to People. The newlyweds announced in early August that they're expecting their first child. Later that month, John and Abbie shared they're having a baby girl, In Touch Weekly reported.

Up until this point, news about Abbie's pregnancy has been nothing but positive. Behind the scenes, however, the expectant mom has apparently been struggling with a severe form of pregnancy-related nausea and vomiting called hyperemesis gravidarum (HG). According to the National Organization for Rare Disorders, HG is rare and the "exact cause ... is not known."

"It hit her hard, and she was down for probably seven weeks with severe morning sickness,” John David told Us Weekly. "She got diagnosed with hyperemesis gravidarum, and she was hospitalized a couple times. We made multiple visits to the ER for dehydration... She couldn’t eat, pretty much, or drink, or anything. So she was actually on IVs and had IVs at home. So that was a pretty scary time."

As miserable as Abbie must be feeling, John-David has been doing his best to support his wife during this difficult time. The dedicated father-to-be told Us Weekly that he makes sure to keep Abbie's water filled up, keep snacks handy, and to provide whatever actually sounds appetizing to her— even if it means a midnight run to the grocery store.

Abbie sang her praises for her husband to the magazine, noting that John-David once made a special late-night trip to the store just to bring her a heat pack. “He said, ‘No, you need this. I want to go get it for you,’” she told Us Weekly. “He’s cooked for me. He’s cleaned. He’s just been an angel.” (Awwww. So sweet.)

Interestingly, John and Abbie made no mention of HG when they revealed the pregnancy on Aug. 1, to be fair, though, they might not have had the diagnosis at this point. “We are on Cloud 9 about welcoming our own little Duggar into the world,” the Counting On couple wrote on Instagram, alongside a photo of themselves in an airplane. “It really is amazing to think about being parents and having our own child to raise. We are thankful that God has blessed us with this new life and we look forward to taking on this new adventure!”

As awful as it must for Abbie that she's dealing with HG, I love that she and John David are sharing their experience. Amy Schumer is another high-profile celebrity who raised awareness for the often debilitating condition through her brutally honest social media photos and videos. Although I have a feeling Abbie won't be posting any clips of herself throwing up, I hope she continues to use her platform to shed light on the topic. Feel better soon, mama!