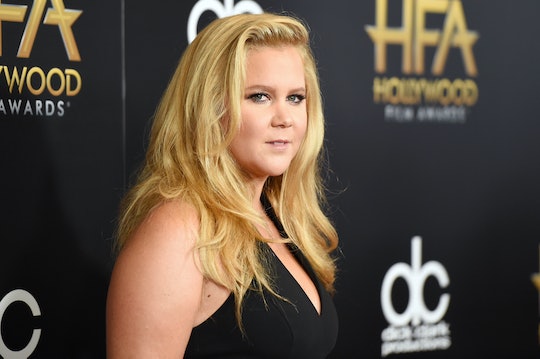 On Friday night, Schumer took to Instagram where she shared what her night entailed. While some people would describe their ideal Friday night to involve drinking and having a night on the town, Schumer's Friday night looks just a bit different than most. This is in part to Schumer's pregnancy and suffering from hyperemesis gravidarum, or HG.

In the photo, Schumer can be seen lounging on a couch and wearing the coziest sweatpants while hooked up to an IV. In spite of the pain that Schumer might be in, the pained smile on her face says it all — she is still smiling through it all.

"Am I glowing?," Schumer captioned the photo.

There only one answer to that question and it is — yes she is.

And her famous fans and followers definitely seem to agree that she is glowing.

"All kidding aside, you are a f—ing champ," Gwyneth Paltrow added.

With so many special people cheering on Schumer through the pain, it's so easy to see why Schumer could have that pregnant glow.

But let's be real, its likely that Schumer is suffering, like, a lot. Last month, Schumer opened up with her fans that she was diagnosed with HG, according to ABC News, which forced her to cancel tour dates and even be hospitalized. Schumer wrote in an Instagram post at the time:

I've been even more ill this trimester. I have hyperemesis and it bl—. Very lucky to be pregnant but this is some bulls—!

HG is a formal term for extreme and excessive vomiting during pregnancy, according to ABC News. While 80 percent of women experience morning sickness during their first trimester of pregnancy, according to Florida Hospital, only a super small percentage of them are affected by HG, which is prevalent in all three trimesters of pregnancy. Having HG can also lead to being hospitalized, hence why Schumer was in the hospital.

But, research has found that one of the best ways to treat HG is with IV fluids. This is because a lot of fluids and electrolytes are lost when someone is constantly throwing up. So, an IV can quickly replenish those fluids and keep you healthy and make you feel happy. However, this is only done with severe cases, according to Cleveland Clinic. But, given that Schumer has her own IV bag in her home, it's suffice to say that her case of HG is pretty severe.

Even though Schumer is clearly in so much pain, it's pretty amazing that she is sharing this part of her pregnancy with her fans — especially because her transparency can resonate with so many other moms who experienced HG during their pregnancies. When Schumer posted a video of herself throwing up to Instagram earlier this month, moms applauded her for showing something so normal, according to InStyle.

Schumer's photo from Friday night is just an example of this — she's simply showing how her life has changed since getting pregnant and being diagnosed with HG. Although her life has completely changed forever, and her Friday nights may never be the same again, Schumer's willingness to share this part of her life with her fans can even make her feel a little less alone.