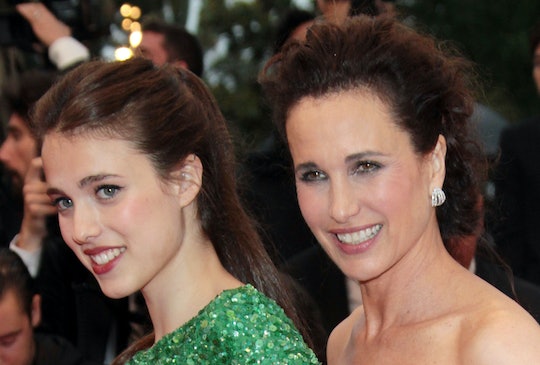 This actress pretty much ruled the red carpet back in the '90s, and now her very own daughters are following in her famous footsteps. But even if you're all grown up and nabbing enviable gigs on the regular, nothing can top the bond that can exist between mothers and daughters. Want some proof? Look no further this stunning throwback photo of Andie MacDowell pregnant with her second daughter, actor Margaret Qualley.

MacDowell has enjoyed a successful career as an actor and model, most notably starring in Sex, Lies and Videotape and Four Weddings and a Funeral. I've also noticed the 61-year-old eternal stunner is anything but retired, having just co-starred in the Adam Brody film Ready or Not. Not too shabby.

As for MacDowell's family's life? Although the actor's two daughters have flown the nest and are successful in their own right, they still have time to remember their glam mom. "Happy birthday Momma," Margaret Qualley, 24, star of Quentin Tarantino's Once Upon A Time In Hollywood, posted in April 2018, showing off a gorgeous family pic of what I assume is big sister Rainey Qualley, now 26, kissing MacDowell's pregnant belly.

Fans loved the shot at the time, leaving numerous comments such as "this might be the most concentrated beauty I've ever seen. My goodness," and, "Gorgeous." Others, however, didn't know that Qualley and MacDowell are related.

One person wrote: "I didn't know u were her daughter! Funny."

"Lol had no idea Andie is your mom," someone else commented.

Comments aside, here's a little background on the Qualley sisters' lives with MacDowell before they became well-known faces themselves. The ladies grew up in Montana, where MacDowell was based at the time with her now-ex-husband, model Paul Qualley. (Qualley and Rainey, a rising singer, also have a brother named Justin. The sibling runs a working ranch in the state, according to The Oklahoman).

The family eventually moved to Asheville, North Carolina, and while MacDowell and Qualley eventually divorced, the actor's kids had a pretty quiet childhood, not even watching TV or any of MacDowell's famed flicks, according to the Evening Standard. "We didn’t grow up watching her movies. She made an effort just to be a mom, which I’m grateful for," Qualley told the outlet in 2017 regarding her famous mom.

You might argue that nature won out, however, because both of the Qualley sisters ended up living in Los Angeles. Qualley pursued acting after having apprenticed with the American Ballet Theatre in New York as a teen, and Rainey was Miss Golden Globe 2012 before landing a full-time singing career under the stage name Rainsford.

All three MacDowell women are close, as Town & Country noted in 2013, with the matriarch having relocated to Los Angeles, where her girls have been roommates at least once, according to the Evening Standard. Rainey gave a shoutout to Qualley on social media last month on the occasion of the premiere of Once Upon a Time in Hollywood, gushing, "sweet sissy, my best friend in the whole world."

Seriously, these three are too adorable. And although the mom-daughter relationship can be so complicated (I got three of my own) it can also be one of the most influential connections a woman will ever have, as evidenced by Qualley's precious throwback photo of her then pregnant mom, Andie MacDowell.