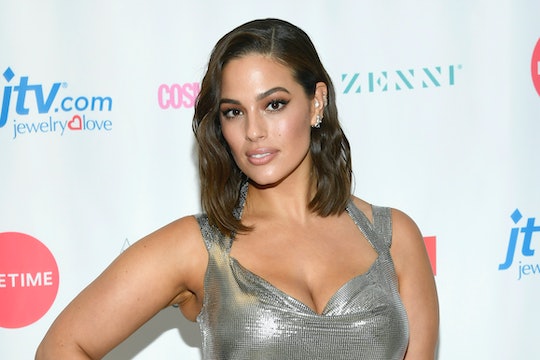 Model Ashley Graham has always kept it real with her followers when it comes to her life. And now that she is pregnant, things aren't going to change — in fact, she's still as honest as ever and hasn't been hiding a thing. Case in point: pregnant Ashley Graham's photo of her stretch marks proves she's embracing every inch of her body throughout her pregnancy.

On Wednesday, Aug. 14, Graham announced that she is expecting her first child with her husband, photographer Justin Erwin, according to Vogue. The couple made the announcement on their ninth wedding anniversary to share the news with their fans and followers, who are all so excited for them. And since sharing that announcement, Graham has seemed so excited to start sharing bits of her pregnancy with her followers, all the way from bump photos to workout videos. Spoiler alert: Fans are loving it.

But people are really digging Graham's newest Instagram post from Sunday, which shows her newly gained stretch marks from her pregnancy on her hips, thighs, and breast. "Same same but different," Graham captioned the photo.

Stretch marks happen, but these new stretch marks have so much significance now that she's carrying her first child. They're now her "mommy marks".

Graham has always been super open to talk about the stretch marks on her body. She has been an advocate for magazines not retouching women's bodies, according to People, and having magazines keep her stretch marks in the photos they take of her, instead of taking them out. During a panel with the New York Times in April, Graham said that she is trying to put an end to people retouching her photos, according to Health. "This is the kind of conversation I'm struggling to have on set: 'You see those red stretch marks on my thigh? Leave those. Those are new and those are real, and we need to talk about those'," she said. "People will take them out, but I'm not afraid to talk about it. I'm not afraid to talk about it on social media."

And in June, Graham told Access Hollywood that when photographers listen to her and don't photoshop her stretch marks out, she sets an example to young girls and women who have stretch marks, just like she does. "When they listen, it turns into this huge celebration of 'Oh wow, we really didn't retouch these photos' and we can actually embrace a woman's body and how she looks, no matter what that is," she said. "Red stretch marks and all."

Now that Graham is pregnant, she is still clearly going to embrace her body for all of it's amazing qualities — stretch marks, and all.

Of course, fans are happy to see Graham speaking out about this issue and showing her marks, just like the ones that they have.

"You make me love myself even more," one commenter wrote.

"Finally someone real," another commenter added.

"I cannot wait for you to be a mother and teach another human being that ALL bodies are beautiful," one commenter beautifully stated. "You're going to be such an amazing mother."

All of these commenters have a good point here. Throughout her pregnancy, Graham will be able to continue to spread body positivity to her followers, and once her baby is born, she will get to share this wisdom with them, too. Graham's newest photo of her stretch marks is only the beginning of this wonderful trend.