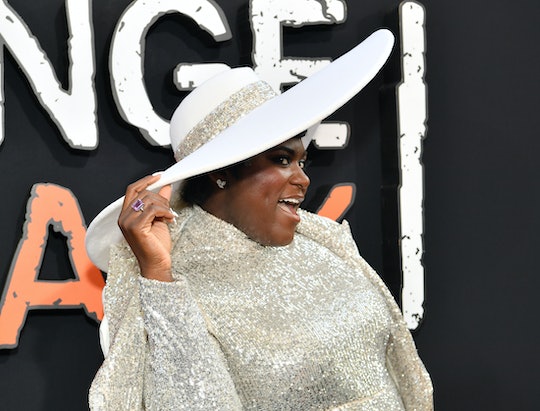 If the previous seasons of Netflix's hit dramady Orange Is The New Black have taught us anything, it's that the actor who plays Tasha "Taystee" Jefferson shines in every scene she's in. But it seems as if the woman who brought Taystee to life doesn't just shine on TV screens. A pregnant Danielle Brooks stunned on the red carpet at the New York City premiere of the final season of Netflix's Orange Is The New Black in a look she later described as "Glammed Up Pimp-Mama."

Brooks rocked both her bump and the red carpet in a long-sleeved, silver sequin gown from designer Christian Siriano, People reported. The actor topped her look with an oversized white hat from Sarah Sokol Millinery and a white tuxedo jacket embellished around the lapel with silver sequins. Diamond earrings, white nail polish, and a 1920s-inspired finger waves hairstyle completed the stunning ensemble.

"This what you call a Glammed Up Pimp-Mama," Brooks wrote on Twitter of her look at Thursday's premiere. "Thank you @CSiriano for making look and feel so rich and expensive once again."

In the hours leading up to Thursday's premiere, Brooks celebrated the arrival of the final season of Orange Is The New Black on both Instagram and Twitter by sharing a collection of photos from previous premieres along with a heartfelt note. "All these pictures hold a story but the photos I take tonight will mean the most, as I share them with the people who have become my family and with carrying the little Debbie cake inside this Taystee oven," she wrote. "It's the end of an era, and the beginning of so much more."

Brooks announced she was "happily pregnant" with her fist child in early July in a post on her official Instagram. "So elated to finally share this news with you all," she wrote in a message to fans.

The actor reiterated her excitement in an Instagram Story posted shortly after her big announcement went public. "When one chapter ends, another begins," Us Weekly reported Brooks wrote. "Super excited to share with you my new beginning. I'M PREGNANT. Counting my blessings." The 29-year-old actor has since said she was "still in awe" about the news and shared photos from her baby shower as well as a pregnancy photoshoot she did.

Then, earlier this week, Brooks gushed about her pregnancy during an interview on Late Night with Seth Meyers. "I'm going to be a mom," she exclaimed before cradling her bump and breaking out into a little celebratory dance. "I am so excited!"

But like many moms-to-be, Brooks went on to reveal that she's found pregnancy can sometimes throw a wrench into even the best laid plans. "My feet are swelling and I brought some shoes, and they don't fit and they hurt," Brooks told host Seth Meyers when asked about the pink fuzzy slippers she was rocking on stage. "I'm going into my third trimester tomorrow, so I'm going to keep it 100."

The final season of Orange Is The New Black, which sees Brooks once again playing Taystee, dropped on Netflix on Friday.