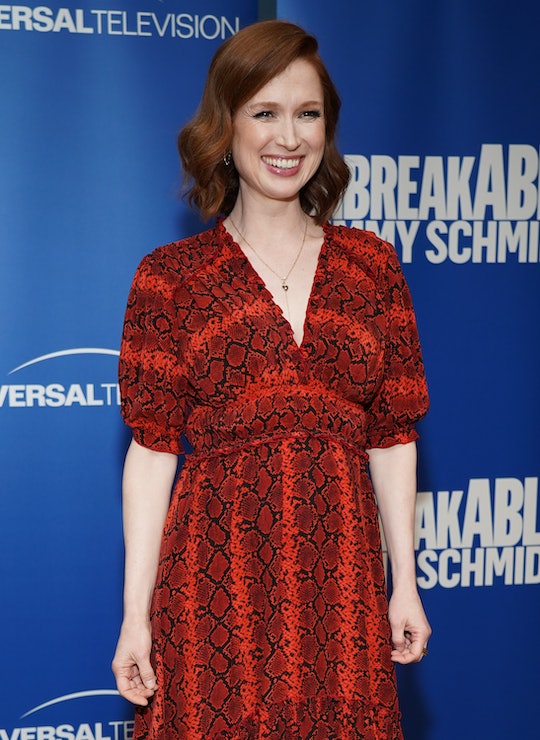 Ah, pregnancy. The miracle of growing an entire human inside of you can be exhilarating. However, when you can no longer see your own two feet, are dealing with horrible indigestion, and are just so utterly over being pregnant, those last few weeks can seem to drag on forever. Suddenly, those 40 weeks (give or take a few) feel like an absolute eternity. Which is why for most moms, pregnant Ellie Kemper's new bump photo is hilariously relatable.

In case you missed the big news, the Unbreakable Kimmy Schmidt star confirmed in June that she is expecting her second child, according to Us Weekly. During an appearance on Jimmy Kimmel Live, the late-night show host was giving Kemper a hard time for missing a party he hosted for the cast of Live in Front of a Studio Audience: Norman Lear’s All in the Family and The Jeffersons.

“This is my nightmare that this subject would come up,” she said. “I was unable to make it. I am so sorry. I’m gonna tell you why: It’s because I’m pregnant and I felt sick … I’ve been blaming the pregnancy [for] so many things, and this is one of them.”

Just a few days later, Kemper shared that she was "basically in my third trimester now" while on Live with Kelly and Ryan.

Now that it's September, Kemper is well into her third trimester. And from the looks of it, she seems totally over it when it comes to pregnancy. That's because on Monday, Sept. 2, she took to Instagram to share a bump photo, along with an all-too-relatable caption, according to Today. "102 weeks pregnant!" the expecting mama declared,

Plenty of Kemper's Instagram followers knew exactly how she feels. One person commented, "Yasss I feel you!! Been telling everyone I’m 87 years pregnant."

Another Instagram user wrote, "Pretty much how every woman feels after 35 weeks lol."

Yet another fan commented, "It feels that way!!"

Another Instagram follower commented, "The 26th month is the hardest I’ve heard."

Meanwhile, yet another person declared, "That ninth trimester is a b*tch."

Kemper and her husband Michael Koman welcomed their first child — a son named James — in 2016. Unlike her first pregnancy, round two was a bit rough in the beginning, according to People. “The first trimester was awful,” Kemper told Kelly Rippa and Ryan Seacrest in June. “I have a 2-year-old now and when I was pregnant with him, I was fine. First trimester [this time], just terrible! Just tired and nauseous and all of it.”

In case you were wondering, Kemper and Koman are waiting to find out the sex of their baby until he/she is born. And although Kemper hasn't shared a specific due date, based on her "basically in my third trimester" comments in June, it shouldn't be too much longer before they find out. Especially considering she's on her "102nd week" of pregnancy; that baby needs an eviction notice ASAP!