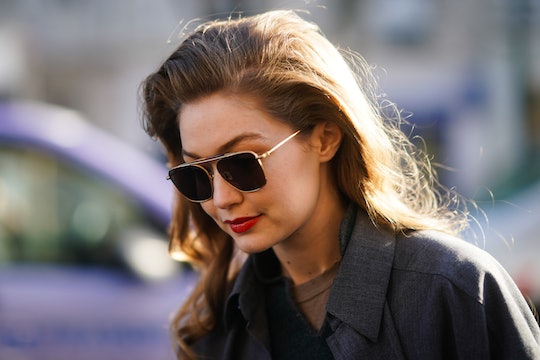 Are privacy and concealment the same thing? According to one famous model, the answer is no. Gigi Hadid shut down claims she's hiding her pregnancy and her growing bump over the weekend. The model and soon-to-be-mom called out British Vogue Saturday on Twitter after the publication reported that she was "disguising" her pregnancy from fans with baggy clothes and clever camera angles.

"Disguise?" Hadid wrote in a tweet to British Vogue. "I said in a baggy jumpsuit the front and side views [of my body] are visually different stories — not that that was intentional or I was trying to hide anything. Will be proud and happy to share 'insight' when I feel like it, thanks."

On Thursday, British Vogue tweeted an article centered around Hadid's maternity style that included the headline, "Gigi Hadid Reveals How She Disguises Her Pregnancy." In the article, British Vogue noted that while hosting an Instagram Live, 25-year-old Hadid had been asked by a fan how she did "not have a tummy" despite being approximately six months pregnant.

"This angle and the really baggy jumpsuit make for an optical illusion," the magazine reported Hadid responded, referencing the khaki Isabel Marant jaya jumpsuit she was wearing. "From the side it's a different story!"

Hadid confirmed she was expecting her first child with former One Direction member Zayn Malik in late April during a virtual appearance on The Tonight Show Starring Jimmy Fallon. "We're very excited and happy and grateful for everyone's well wishes and support," she told Fallon, before revealing that there was at least one positive aspect to being pregnant during a global pandemic. "Especially during this time, it's a nice silver lining to be home and be together and really experience it day by day."

Of course, the ongoing coronavirus outbreak, which has resulted in stay-at-home orders and social distancing recommendations across the United States, has limited paparazzi and fans' chances of catching a glimpse of Hadid in public. But according to Hadid, wearing a baggy jumpsuit in one video does not equate to disguising an entire pregnancy.

In a follow-up tweet published Saturday, the model went on to clarify that although she's kept a relatively low-profile during her pregnancy, she's never attempted to disguise or hide it. In fact, she's been experiencing and sharing it with those close to her. "For now I am proudly experiencing and sharing this time with my family and loved ones," Hadid wrote.