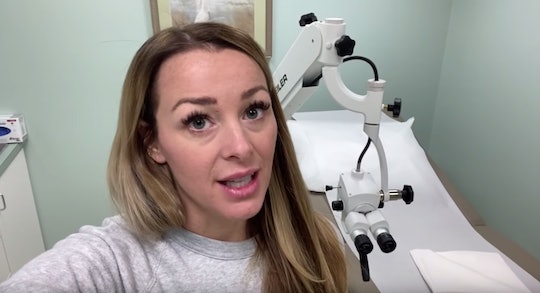 Those who've been following the story of Jamie Otis and Doug Hehner since they tied the knot on Married at First Sight know their road to building their family hasn't been an easy one. While they have a daughter — and are currently expecting their second child — they've faced struggles with infertility as well as multiple miscarriages. And now, the expectant mom may be dealing with a potentially scary health issue. In a new video, Otis shared she's concerned about possible signs of cancer after receiving results from a recent examination.

On Dec. 4, Otis, who is currently 17 weeks pregnant with a baby boy, posted a video on YouTube and an update on social media after visiting her doctor. "I went to the doc and heard my pap was bad & I have HPV,” Otis wrote on Instagram, linking to her video. “Although it sounds like an STD and I should freak the F out, I know this is somewhat common and not to be overly worried about." HPV, also known as human papillomavirus, is the most common sexually transmitted infection in the United States, according to the U.S. Centers for Disease Control and Prevention, and can cause various types of cancers, including cervical.

Otis, who shares 2-year-old daughter Henley with Hehner, went on to explain that she was scheduled to have a colposcopy — a screening that lets doctors get a close look at your cervix to screen for cancer — in order to get a better idea of what was going on. If the doctor didn't see dysplasia, then it's "not really a big deal," she wrote. However, if the doctor did see dysplasia, that could be an indicator of early cancer.

"I got the call today saying that my doc did see dysplasia & since I’m pregnant we will have to wait to biopsy my cervix until after I have the baby," Otis continued on Instagram. “I can’t help but wonder, ‘What if?’ ... I just have to wait until after I have the baby to really know what’s going on inside me, but I’m just putting the positive vibes out there & praying & being so THANKFUL for my health.”

Plenty of Otis' followers chimed in with words of encouragement and support for the (rightfully) worried mama. One such follower wrote, "Positive thoughts!!! It’s easy to drown in it but right now you have to focus on bringing baby boy into the world. Save everything else for another day."

It's worth noting that cervical dysplasia — a condition during which healthy cells on the cervix undergo abnormal changes — affects between 250,000 and 1 million women every year in the U.S., according to Healthline. But just because a woman's colposcopy reveals dysplasia, that doesn't necessarily mean she has cancer. That's where the biopsy comes in. Low-grade damage can go away on its own; but high-grade tissue damage may require treatment.

As concerning as it must be to not know whether her abnormal test results indicate a sign of cancer — and having to wait until six weeks after she gives birth — Otis seems to be maintaining a positive attitude about it all. But until she shares any further updates, her incredible openness is undoubtedly helping spread awareness for the very reason to schedule those uncomfortable, yet potentially lifesaving, screenings.