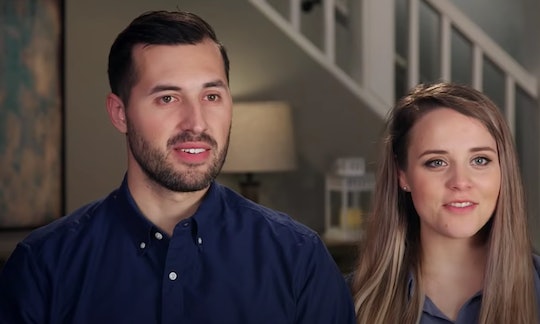 Jinger Duggar Has A Delicious, Yet Stereotypical Pregnancy Craving

It sounds pretty stereotypical, but Counting On star Jinger Duggar revealed her pregnant cravings include plenty of pickles. After announcing she and her husband Jeremy Vuolo are expecting another daughter, the expectant mom hopped on Instagram Live and shared that she's been craving everything sour.

Duggar also shared that vegetables have been on her cravings list, which is convenient considering that her daughter Felicity has been loving fresh snacks lately, too. Duggar revealed on Instagram earlier this week that her daughter has been a fan of "grabbing an orange off of a backyard tree or fresh cucumber."

During their Instagram Live, Duggar and Vuolo also addressed fans' questions about their toddler. The couple confirmed that their daughter is a "social butterfly that loves kids" and Vuolo said that he is so excited to see how Felicity is with her little sister when she arrives in November. "She is going to be such a sweet older sister," Duggar said.

Vuolo reiterated this in his Instagram post announcing their big news on Thursday. "Felicity's recruited a little sister to join her squad!" he wrote. "Recently she's been practicing her big sistering on dolls, cradling them and shushing them to sleep. Pretty soon, she'll be holding a real baby. But she's ready and so are we."