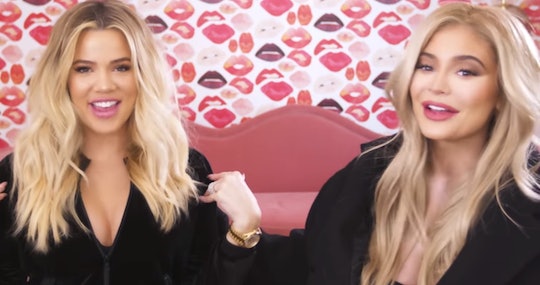 All the secrecy surrounding the newest generation of Kardashians had fans pretty bummed, given that they're so accustomed to having a front-row seat for the family's comings and goings. Those who were disappointed over missing out on all the fun are in luck, though, because a pregnant Kylie Jenner and Khloe Kardashian compare baby bumps in the season finale of Keeping Up With the Kardashians, as seen in a new clip published on Friday. Viewers have been watching the sisters bond on their screens for over a decade, and now they'll get to see whether elevated hormones and out-of-control appetites brought them closer together.

In the teaser clip, Jenner and Kardashian are seen standing arm in arm as they reveal the news. "We're three months apart, me and her," Kardashian says. The pair agree that they're excited about their pregnancies, and Kardashian adds, "We both have never been through this before!" They seem to have had the best of both worlds while they were simultaneously expecting; older sisters Kim and Kourtney each have three children, and surely plenty of advice to give, but they also had each other, fellow rookies, to turn to when they needed a sympathetic ear from someone right in the thick of it.

This isn't the very first glimpse fans have gotten of Kardashian and Jenner pregnant together; they've been slowly doling out sneak peeks for about a month now. Jenner never confirmed her pregnancy; instead, she announced the birth of her daughter on Feb. 4 in an Instagram post, in which she apologized to her followers for all the subterfuge. "I understand you're used to me bringing you along on all my journeys," she wrote, but "my pregnancy was one I chose not to do in front of the world." That same day, she posted a YouTube video tribute to her baby, and if you skip to about the 7-minute mark, there's a brief shot of Kardashian and Jenner's pregnant bellies.

Kardashian had previously announced her pregnancy in her own Instagram post in late December, and after Jenner shared her news, Kardashian posted a photo of the two of them side by side wearing crop tops.

Congratulations My Sweet Kylie! What a magical ride it's been! I'll miss you bumping along with me. Never in a million years did I think we would do this together but it's been that much more special because of it. God is so great!! He had His plan all along! I love you little mama 💕 love big mama

Now, after months of speculation, nearly all of the Kardashian-Jenner baby news is public. Much of their 2017 headlines were devoted to rumors that Kim was expecting via surrogate, but that all changed when TMZ revealed that Jenner was pregnant in late September, and then blew up Khloé's spot just four days later. Two days after that, Kim confirmed her baby news (perhaps in an attempt to distract from her sisters'), but it was no use; the age of Trump has trained Americans to follow multiple shocking news items simultaneously.

Now that Jenner's shared the news of her baby (including her name and photo) and Kim's debuted her third daughter, Chicago, Khloé is the only one left with any secrets. During the Keeping Up With the Kardashians finale on Sunday, fans will learn the sex of her baby, according to another clip published on Thursday, and it's only a matter of weeks before she gives birth. Khloé's due date hasn't been made public, but in early February, she posted a selfie captioned "29 Weeks and counting," which would put her at about April 24. After that, all eyes will be on Kendall.