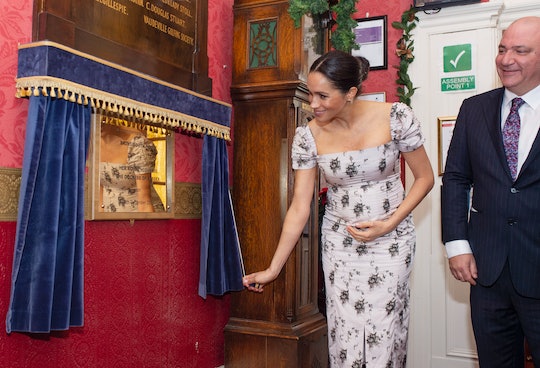 Meghan Markle Had The *Perfect* Response To Being Called 'Fat'

Meghan Markle is expecting her first child with her husband, the United Kingdom's Prince Harry. And as most people who have been pregnant know that pregnant comes with some not-so-great comments made about your bump. Needless to say, people have said some pretty interesting things about Markle's bump. But, during a recent royal appearance, Meghan Markle had the perfect response to being called "fat," proving that she is a pro in her pregnancy.

During an official royal appearance to the London animal welfare charity Mayhew, on Wednesday morning, Markle met with well wishers inside. These moments are typically spent with people congratulating Markle on her pregnancy — or spent asking her questions about her pregnancy. But, one well wisher decided to go above and beyond with their comments, by "poking fun" at Markle's bump, according to Us Weekly.

"Lovely lady you are!," one well wisher reportedly said, according to Us Weekly. "May the good lord always bless you. And you're a fat lady!"

This interaction, which was captured on camera by reporter for The Sun, Emily Andrews, was clearly not said in ill will. The woman looks so happy to be meeting Markle and just so happened to call her "fat."

But, Markle had the most perfect response to this. In the video, Markle can be seen laughing a lot. "I'll take it!," she said, still laughing.

There are so many ways that Markle could have handled these comments. She could have stopped in her tracks and move on to greeting the next person, or gotten upset with the woman. But the fact that she embraced it and handled it like a champ proves that Markle is now a seasoned professional at being pregnant. And although Markle was not born into the royal family, she kept her composure as well as Queen Elizabeth II (Prince Harry's grandmother) would have in that situation.

It's understandable why this woman would want to comment in some way or another about Markle's bump. Markle is currently around five months along in her pregnancy, according to People — she revealed during a recent appearance that she is due in late April and doesn't know the sex of her child. And during these recent outings, Markle's bump has looked more prominent than ever.

There is no denying that Markle's bump is getting bigger. so it makes sense why this woman would want to make some kind of comment about it. But just because she handled these comments like a champion, doesn't mean that other pregnant women will.

Calling a pregnant woman "fat" to her face is one of those things that people should never say to a pregnant woman, according to U.S. News & World Report. Some people see this as body shaming — which is something women experience enough of when they're not pregnant. So, pregnancy doesn't make hearing these comments any easier.

"There's nothing to be gained by talking about anyone's size," Jodi Rubin, a psychologist in New York told U.S. News & World Report.

All unnecessary comments aside, this same woman also got some very good information out of Markle, according to People. After telling Markle that she would have a boy, Markle had the perfect response that revealed a lot about her approach to these last few months of pregnancy. Markle said, according to People:

Oh, you think it's going to be a boy? It's a surprise. We don't know what we're having. I ask everyone what they think and everyone has a very strong opinion about it.

Pregnant women know to expect the unexpected — whether that comes to their bodies or comments from people who mean well. But the best way to deal with this is to just go with it And that's exactly what Markle did on Wednesday.