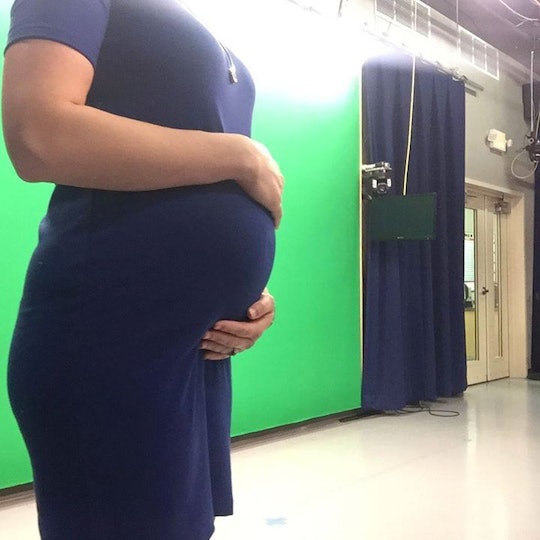 Minnesota meteorologist Cindy Morgan doesn't believe in the outdated idea that she should "hide her baby bump." But that is exactly what viewers are asking her to do. As she began to progress in her second pregnancy, Morgan received several emails criticizing her appearance and her bump-hugging wardrobe. wardrobe and how she looked. One viewer went so far as to claim that Morgan was, "being disrespectful and inappropriate for a woman in her condition." (FYI: Pregnancy is not a "condition." Male pattern baldness or erectile dysfunction is a condition. Pregnancy is a state of being. Okay, good talk.)

But Morgan didn't sit back and take the body shaming. Instead, she voiced her disappointment with viewers on Facebook and posed the question, "since when has body shaming a pregnant woman become the thing to do?"

"I’ve been told to wear maternity clothes (which I do), I look like I’m about ready to tip over, I show too much of my belly, and my choice in clothes is distasteful and disrespectful," she wrote. "Those are just a few comments folks have emailed or said to me." She went on to say the idea that a woman needs to conceal her bump is "outdated thinking," and that the comments have taken away a "small piece of excitement" over her daughter's arrival.

And, unfortunately, Morgan isn't the only on-air pregnant woman to be the victim of judgmental backlash. Back in August, Philadelphia meteorologist Katie Fehlinger was criticized for her appearance while pregnant with twins. At 35 weeks pregnant, Fehlinger received messages from viewers, telling her that, "sticking your pregnant abdomen out there like that is disgusting."

Thankfully, for every ridiculous and hurtful comment thrown at working pregnant women like Katie and Cindy, there is a plethora of strangers that are more than willing to speak out and support them. KAAL - the station Morgan works for - has shared support of her and the other pregnant women who are currently working saying it "supports the strong, professional women that work here, especially those who continue to put in all the necessary hours while also being pregnant." The post prompted women and men (like those below) to show their support and #EmbraceTheBump.