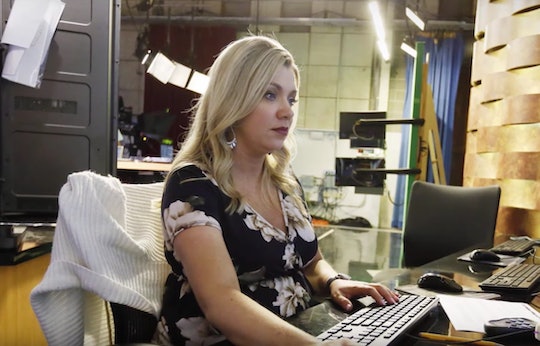 Meteorologist Calls Out Viewers Who Criticized Her Pregnant Body

The prevalence of body-policing amongst individuals, and women particularly, is an issue on which we have just begun to scratch the surface. In an age of body positivity and neutrality, we are just beginning to see the hurtful, damaging, and frankly unreasonable demands placed on bodies. This is particularly, and most unfortunately, true for pregnant women. However, one meteorologist who's currently pregnant is taking a stand, sending a message to people criticizing her body and her appearance, and reminding us all that we still have very far to go.

Ashlee Baracy, who works at WBNS-10TV in Ohio, is expecting her first child and is due in August, according to the New York Post. Though the news of her pregnancy, which she announced in February, should have been an elating and exciting time, Baracy shared with The Columbus Dispatch that she was met with a different emotion entirely: dread. "The sad part is the second I found out I was pregnant, I knew I would have to deal with criticism of my body by viewers," Baracy told The Columbus Dispatch.

And, sadly, she was right. Baracy shared with the publication that she was immediately greeted with a barrage of comments and "concerns," including one individual who told her her that she's "putting on the weight" and that she should "watch her heart," according to a screenshot of an email from a viewer she shared on Facebook. In June, Baracy called out that bit of hate mail from the viewer named "Clay Walker," writing on Facebook: "My weight gain is normal, my blood pressure is perfect... BLESS your heart 'Clay,' because Lord knows you will need all the blessings you can get when you meet the Lord someday at the pearly white gates."

In another post on Facebook, Baracy shared a message she got from someone that said, "I couldn't see next weeks [sic] temps. Your baby was in the way lol."

Yet another viewer messaged Baracy and told her to "buy bigger clothes." Baracy's response? As she wrote on Facebook with a screenshot of the rude message, "When did it become ok to shame a pregnant woman’s body?"

Tired of the bullying and unsolicited comments, she decided to take a stand because, to put it simply, this just shouldn't be happening. As she told The Columbus Dispatch: "If I can use my voice to make things better, I will do that. I hope this is a platform where we can talk more about it, because there are many women who deal with it."

On Instagram, Baracy shared her thoughts on the subject a bit more and her decision to call out body-shamers. "I chose this career because I believed it would give me a platform to make a difference... as a role model and a meteorologist," she began in the caption. "I never really considered how many different ways I would be able to make an impact, but hopefully this is one... Every time I have called out a hater, the overwhelming outpour of encouragement has been touching and incredibly inspiring. Thank you, Central Ohio.‬ Most importantly, thank you for embracing and caring about my growing family."

Fans and followers immediately began expressing their support for Baracy. "You go girl. People who pick on you must be very sad people. Keep it up," one comment on Instagram read. "They have a problem with themselves, so they take it out on you. Don't even pay attention to them," said another.

It's true that society is unreasonable when it comes to women's bodies in general, but it is extra disappointing to see the words and messages sent towards women who are pregnant, whose bodies are changing rapidly to accommodate the growth and development of another person. It drives home the fact that for many people, women's bodies exist exclusively for aesthetic appeal. Fortunately, individuals such as Ashlee Baracy are standing up to these outdated and frankly damaging beliefs, and setting a new standard for generations to come.