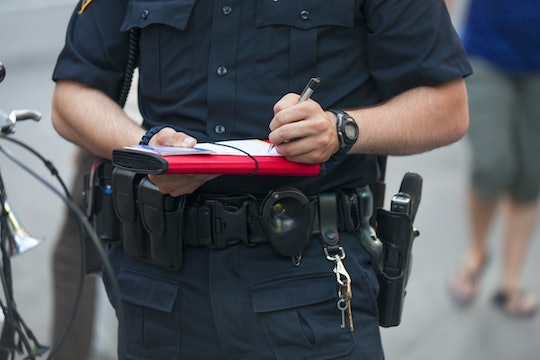 Every parent of a toddler knows, when your kid's got to go to the bathroom, it's an emergency. While you may not think twice about letting your kid pee in public, a pregnant mom got cited with "disorderly conduct" after letting her 3-year-old pee in a parking lot in a pinch, as ABC Eyewitness News reported. As you'd expect, the incident is causing a lot of controversy online, especially among parents who have found themselves in similar situations.

Last week in Augusta, Georgia, Brooke Johns' son let her know he needed to go to the bathroom, so she pulled into a gas station parking lot, as WFLA reported. She quickly realized that he wasn't going to make it inside the store to use the restroom, so she allowed him to relieve himself outside while she covered him, according to KTLA.

A county deputy was reportedly nearby and saw the incident unfold, according to ABC News. Johns told CBS News affiliate WRDW that she tried to downplay the seemingly innocent incident, telling the officer, "'Accidents happen,'" but he apparently wasn't buying it.

Johns told the news outlet she didn't really have a choice at the time. "What if I would have ran in the bathroom and someone had been in there? What I was going to let him do? Pee on the floor of the gas station?" she told WRDW.

Johns was hit with a disorderly conduct ticket, WFLA reported, and she's scheduled to appear in court days before she's due to give birth to another child.

Per the ticket, obtained by WRDW, the officer claimed he "observed the male's genitals and the urination" and states "public restrooms are offered at the location." Johns maintains that it was an emergency situation, saying, according to WFLA: "He was peeing before his pants were even all the way down, so obviously he had to go."

Romper's request for comment from Richmond County Sheriff's Department regarding the incident was not immediately returned.

The story has sparked outrage online, with some calling it "Ridiculous." Others called it "laughable." The consensus online appears to be that the officer perhaps overreacted to the situation, especially given the circumstances. Not only is Johns' son young, but she is heavily pregnant and therefore was unable to pick him up to rush him inside to a bathroom, according to NBC 2.

"This is Ridiculous! Hope this mom wins in court and the ticket is voided! Yes, we know it's law no peeing in public blah blah blah, but this is a child that could not hold it and a pregnant mom that could not rush in to a store carrying him," one person tweeted.

A judge could throw the case out entirely, as Fox 2 Detroit reported. It's unclear, however, if that will happen. Many are hopeful that the situation works out in Johns' favor. After all, she's just a mom doing her best to get by. While public urination laws are important, and the police officer was doing his job, citing parents for innocent behavior by their children feels, as many noted on social media, a bit extreme.