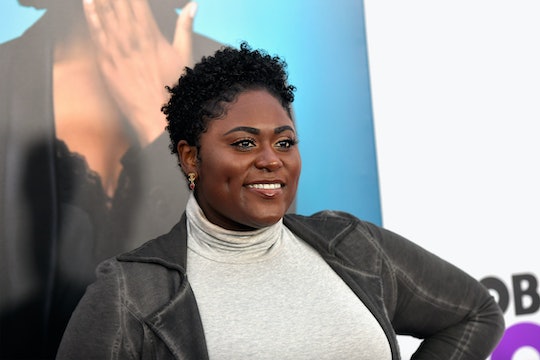 From the moment a person becomes a mother, it seems like society expects them to fulfill certain expectations. New mothers, for instance, are suddenly pressured to dress and act "like a mom" — whatever that's supposed to mean. But one person who isn't paying these expectations any mind is pregnant OITNB star Danielle Brooks, who showed off her bump while wearing lingerie. Spoiler alert: fans are obsessed.

On Tuesday, July 9, Brooks took to Instagram to share a photo update with her fans just seven days after she announced her pregnancy news on July 2. The photo featured the Orange Is The New Black actress wearing black lingerie and a robe while sitting in a chair with one hand on her bump. "Still in awe," the expecting mama captioned her post. And let me tell you, her Instagram followers were totally there for the sexy maternity photo.

One person commented on the post: "Isn’t it miraculous?! You are a goddess. Sending so much love."

"There’s the bump! Pregnancy is so beautiful," another Instagram follower wrote. "Love you D!!!!"

Yet another person declared, "The most beautiful thing."

"My eyes just got wet," a person penned.

As E! News reported, the actress and singer revealed earlier this month that she's expecting her first child. “So elated to finally share this news with you all,” the 29-year-old captioned a July 2 Instagram post. “I’m happily pregnant!” The photo featured Brooks holding up a positive Clearblue pregnancy test with a big smile.

In Brooks' Instagram Story, which showed off her bump, she added, "When one chapter ends, another begins. Super excited to share with you my new beginning. I’M PREGNANT. Counting my blessings.” She also revealed that she's "5 months" along in her pregnancy.

You guys, I couldn't be more excited for Brooks. It's clear she's going to be an amazing mom, and I can't wait to follow her pregnancy journey.

But wait — this isn't the first time Brooks has shared an image of her midriff via Instagram. As Cosmopolitan reported, the actress posted a gym selfie wearing a shorts bra — and no shirt — back in 2015. And with it came a powerful body-positive message for her fans.

"I've always wanted to do this, but have felt shameful and have told myself 'until my body is perfect, I'm forbidden,'" she wrote at the time. “Today my inner being told me to turn up the notch on my self-love. I should not be ashamed of my body. I’m not a walking imperfection! I’m a Goddess. Secondly, I’m a confident woman! That doesn’t stop once I take off my spanx. Lol sometimes it’s a struggle."

She added, "Sometimes I don’t like what I see, but I have the power to change the way in which I relate to my body both physically and mentally."

Yasss, girl! No matter your age or size, everyone should aspire to love their body. And this sentiment applies to pregnant people and mothers too, a truth Danielle Brooks' demonstrated beautifully in her new bump photo.