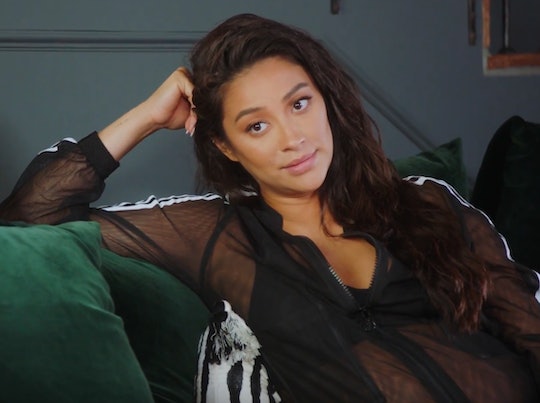 Pretty Little Liars alum and mom-to-be Shay Mitchell is in the home stretch of her pregnancy. With a potential delivery just weeks away, things are starting to become real. And similarly to many future parents, she's working on a birth plan with her boyfriend and father of her child, Matte Babel. But as their latest installment of Almost Ready suggests, the two are butting heads on some key issues. Just one example? Shay Mitchell's boyfriend doesn't want her to get an epidural, an opinion fans have many ~thoughts~ about.

Like many first-time moms, Mitchell describes herself as being "terrified of giving birth," a fear that tends to get worse right before your date. The unknown can be incredibly scary, so no one can blame her for feeling this way. And to quell her anxiety a bit, she's considering getting an epidural to help with pain management during labor. Mitchell brought up this possibility in a conversation with Babel, which was filmed in Sept. 4 episode for Almost Ready, titled, "A Pregnant Man?!? What??"

After filling Babel in on her potential birth plan, Mitchell suspects that he's not on board with epidurals and confronts him.

"Am I partial to no epidural? Yes I am," he tells her. "I'm a hypochondriac. I'm afraid of drugs, my mom didn't use one ... I meet women all the time who didn't use one."

Hmm. I'm really wondering how many women Babel talks to about delivery on a daily basis because 71 percent of mom-to-bes get epidurals or other spinal anesthesia, according to a study published in Anesthesiology.

Apparently shocked, Mitchell then asks him, "Would you get a root canal without pain medication?" Babel responds (and you might want to sit down for this one), "A root canal is not comparable because your body isn't meant to go through a root canal. As a woman your body is genetically engineered to give birth." Oy.

As expected, the comments from fans are priceless.

"Since Matte wants to tell you you don’t need an epidural, you should hook him up to one of those machines so he can feel what a contraction feels like and then give you his opinion," said one enlightened YouTuber.

Another can't get over Matte's mansplaining, stating, "I find it hard that Matt tends to mansplain and thinks he knows what’s better for Shay... I understand that he’s a traditionalist and they’re meant to make joint decisions but like it’s her body and she should get an epidural and use formula if she wants to... But anyway they look super happy."

And this guy says what everyone is thinking, joking, "Dude got a lot of opinions for someone who ain't carrying the baby."

One particularly angry commenter tweeted: "If a man told me to give birth without an epidural i’d snap his neck jsjsjsjsj."

Someone else added, "I don’t get the whole Shay Mitchell and her baby daddy not agreeing with her wanting an epidural...like she’s the one going through labor and pushing the baby out...."

No definitive decision was made on the epidural topic, but that wasn't the end of the clashing. It seems that Babel wants Mitchell to breastfeed, even though she's not completely on board with the idea.

"If you can't breastfeed I totally understand. Some women don't want to and I'm against that. If you have the innate ability to breastfeed, and the kid latches why wouldn't you want the best for your baby," Babel said.

"Formulas are good too," Mitchell says. End of convo, right?.

But here's where things get interesting, and truthfully funny. Mitchell knows that Babel just isn't getting it so she buys a 30-pound belly weight and makes him wear it while they take a hike. As if that wasn't enough, she also hooks him up to an app-controlled electric transmitter that mimics the kicks of a baby in the third trimester.

Babel screams when the transmitter goes off for the first time, a reaction that doesn't seem to bother Mitchell. "I want you to feel the exact sensation that I'm feeling," she says, but he can't even make it ten minutes on the trail without stopping to catch his breath. Mission accomplished.

The two might not be on the same page right now (and Babel certainly has a lot of opinions) but it's clear he loves Mitchell and can't wait to be a father. In a recent Instagram post Babel wrote, "Watching the both of you grow over the past 6 months has been the most beautiful thing in the world. The strength, vulnerability and grace you’ve had during this pregnancy has left me in awe, you’re going to be an incredible mom. We’re lucky to have you, love you.” Aww.

How will things turn out for the Mitchell/Babel clan? Fans will have to wait to see what transpires in the days leading up to the birth. But it looks like the two have a lot more talking to do before the baby arrives.