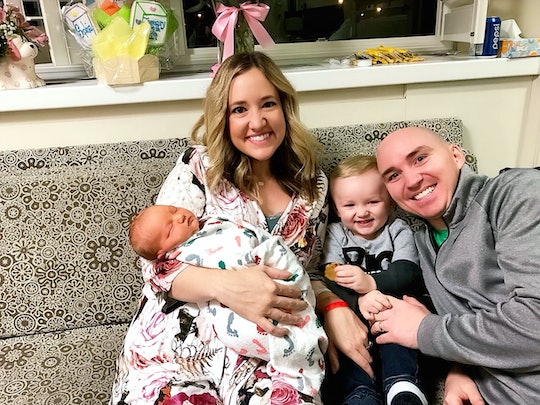 At the age of 21, Natalie Hayden began experiencing extreme stomach pain, weight loss, and high fevers. Being her last year of college, she was preparing to enter the workforce as a television news anchor. But soon, that dream would be put on hold, at least for a short period of time. Because after many tests, she was diagnosed with inflammatory bowel disease (IBD), which would complicate her pregnancy years later.

“It really was a learning experience from the start because you really have a lot to learn when you’re given a disease for which there’s no cure,” Hayden tells Romper of her Crohn’s disease diagnosis via phone. “It’s a complicated illness so it’s different for every single person.”

Many recently diagnosed women ask themselves similar questions. Despite the fact that Inflammatory Bowel Disease affects 1.6 million people in the United States, per Digestive Diseases and Sciences — and over 50 percent of them are women — those without a family history of IBD (which includes Crohn's disease and ulcerative colitis) are unaware of its effects. That’s why professionals and patients came together to create the IBD Pregnancy Project, an online information platform for those impacted by the disease.

I had heard from one nurse practitioner that it can take longer if you have Crohn's disease to get pregnant, but as long as I was in remission, it could be OK. It was confusing.

“There’s a lot of misinformation for both providers and patients out there,” says Dr. Uma Mahadevan, a professor of medicine at the University of California, San Francisco (UCSF) and medical director of the UCSF Center for Colitis and Crohn’s Disease. Dr. Mahadevan serves as a chair on the IBD Pregnancy Project and is excited to clear up many misconceptions about IBD that hopeful mothers have. These include: Having to completely stop taking your prescriptions and not being able to get pregnant in the first place.

“Women with IBD are three times more likely to choose to be childless [voluntarily]... and much of that is driven by fear of pregnancy,” Dr. Mahadevan tells Romper by phone. “And [another] major misconception is that they have to stop all their medicine to conceive or to breastfeed and that is actually a dangerous one because then their disease may flare and that’s actually the biggest risk to the pregnancy.”

Flaring during pregnancy can sometimes be unpreventable, however, causing another layer of worry for expecting mothers. Laura Galloway Caldwell, a mother from Denver, Colorado, took every precaution possible, continually checking in with a high-risk OB-GYN and gastroenterologist while trying to conceive.

“It was kind of unclear — I had heard from one nurse practitioner that it can take longer if you have Crohn's disease to get pregnant, but as long as I was in remission, it could be OK. It was confusing; It was confusing to know what the outcome could be. They told me that the baby could be smaller than usual and that I should keep on my medication but that we would have to monitor everything more,” she tells Romper.

She’d been diagnosed in 2014 with Crohn's and two years later was ready to have her first child. Yet in the second trimester, the disease flared.

“Once I had the flare, I had to go on prednisone which can be really risky, especially if you take it in the first trimester. But because I was in the second trimester, it was still risky, but the positive upsides outweighed the negative potentials of it,” she says.

Hayden, on the other hand, was fortunate enough not to flare during pregnancy. To try and avoid the chances of that happening, she and her doctors made sure her body was in the right state. A short period of time before she got pregnant, 18 inches of her small intestine had been removed, putting her in remission.

You don’t want to get pregnant while you’re flaring because then that likely carries over for all nine months.

“I’ve always wanted to be a mom. It was just a matter of making sure my disease was as calm as possible and in a remission state,” Hayden says. “There’s what’s called the ‘rule of thirds’ with autoimmune diseases like Crohn's disease. One third is that you will get better, one third get worse and one third stay the same. You have the greatest likelihood of having a remission-stage pregnancy if you go into it like that. So basically, timing is key. You don’t want to get pregnant while you’re flaring because then that likely carries over for all nine months.”

In addition to regular checkups, Hayden utilized vitamins, supplements, prescription prenatals, and monthly ultrasounds to measure the growth of the baby to ensure that all was well throughout the pregnancy. Now, two years later, she’s just given birth to her second child.

The concern doesn’t stop right at birth, however.

“Often times, the majority of people will feel well while they’re pregnant with Crohn's, but then what happens is the minute they get that baby out of you and they cut the umbilical cord, you lose the pregnancy hormone that causes your digestion to slow down and it protects you throughout the pregnancy. Often times, we have postpartum flares.”

Jessica Caron, an IBD patient herself and advocate working with the IBD Pregnancy Project, relates to both Hayden and Caldwell’s stories. After being first diagnosed, she recalls that “there [were] a lot of things to take into consideration and a lot of it was overwhelming.” Yet, although somewhat fearful, she dug deep into the disease to learn more about it and how it would impact her as a mother.

“As I did my research at first, I had to [differentiate] facts from fiction and really think about what was most important to me, which was to have a healthy baby,” Caron tells Romper by phone. “So I did a lot of research, I had to work closely with my clinician and I learned about the importance of being in remission prior to pregnancy. So that process took a couple years actually to make sure that my body was healthy and ready to have the best pregnancy that I could have possible.”

All three mothers, as well as Dr. Mahadevan, agree that having adequate knowledge about IBD is the only way to have a successful pregnancy.

Caron is incredibly proud of what the IBD Pregnancy Project is offering mothers, bringing together the “patient experience with the best known clinical information and [weaving] those two very important topics together in a way that I as a patient hadn’t seen done before.” Hayden, having had a chance to check out the project, agrees as well.

You may be surprised to find that a lot of what you’re worried about has been researched.

“[The website has] checklists for talking with your doctor in preconception, pregnancy, postnatal care, and breastfeeding, as well as a list of those common misperceptions and some evidence that you can use to feel empowered when talking with your partner, with others, and with your clinician most importantly,” says Caron.

She adds, “I would first tell women that you’re not alone. If it feels scary or concerning, you should absolutely reach out to your clinician… right away. Even if you don’t want to have children for a few years, you should talk to them and share some concerns that you may have because you may be surprised to find that a lot of what you’re worried about has been researched and there’s evidence to share that medications are safe, women with Crohn's disease and IBD can get pregnant.”