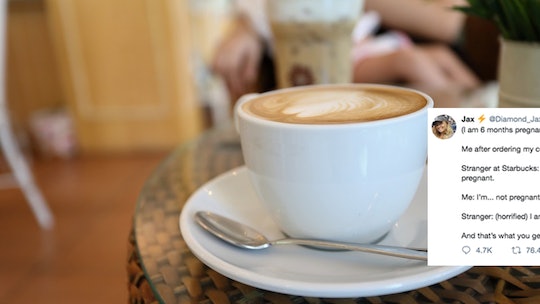 There are a lot of things that can come along with pregnancy, like body changes, food restrictions, and plenty of unsolicited advice, for instance. The latter example is perhaps the most annoying, which this pregnant woman who was shamed for drinking coffee proved in one hilarious tweet about the subject. Not only did the mom-to-be expertly explain why you shouldn’t share unsolicited tips, but her experience inspired other moms to open up about similar run-ins, and the entire thread is truly eye-opening.

On Friday, a woman revealed on Twitter that she popped into Starbucks for a little pick-me-up, an outing that was interrupted after she was approached by a stranger who was concerned about her coffee intake. The woman noted that while she is, in fact, six months pregnant, she lied to put the mom-shamer in her place. Per the tweet, the stranger — apparently a pseudo pregnancy expert — warned her that she "should be drinking decaf" while pregnant, to which the Twitter user responded by saying, "I'm... not pregnant." While I don't usually condone lying, in this case it was warranted.

With that one comment, the shamer became the shamee. And, according to the tweet, the stranger profusely apologized and went on her way. "And that's what you get for giving unsolicited advice," the Twitter user concluded, a sentiment I wholeheartedly agree with.

After the mom-to-be shared her story, her mentions were flooded with other moms applauding her handling of the situation, while also sharing their own experiences.

"A male coworker once said to me as I was eating a McDonald's cheeseburger and fries, You should eat something healthy, like a salad. I was vegetarian up until my 6th month, I literally hadn't had McDs in 15+ years. I looked at him as I shoved it in my mouth and said SHUT UP ERIC," one Twitter mom wrote.

"This reminds me of the time my sister was sick of strangers commenting on her daughter's bald head. Her reply became 'The doctors say her hair will come in when chemo is done,'" another shared.

"My sister is hilarious. When she was pregnant, and people got in her face about the baby she would say, 'Want to feel a kick?' And as they reached for her belly, she would kick them in the shin," a third mom shared in part in a Twitter reply.

"LOL, I'm a curvaceous woman. Years ago I was walking into a store. A gentleman had an Agape Church table set up by the door. He said, 'Congratulations on your pregnancy.' I smiled broadly and said, 'Oh no honey, that's just fat.' Don't think I ever saw someone turn that red," someone else added.

This isn't the first time the pregnancy police have come for a pregnant coffee drinker. In May, comedian Tiffany Stevenson tweeted about seeing a pregnant woman approached in a Starbucks about her caffeine consumption — this time by a male barista, as noted by Allure. According to the tweet, while ordering her beverage, the barista asked if he should "'make a decaf.'" Stevenson tweeted that the pregnant person declined, but the barista kept pushing. "'No I should because caffeine is bad for the baby,'" he said, according to the tweet.

For starters, caffeine isn't great during pregnancy, but it is allowed. Baby Center reported that the American College of Obstetricians and Gynecologists recommends cutting back during pregnancy, but that doesn't mean a person has to cut caffeine out completely. Pregnant people can safely consume 200 milligrams or fewer of caffeine per day, which is about one 10-ounce Starbucks coffee, according to Baby Center. Consuming more than that per day comes at a risk, but every person is different. If you're concerned about being able to drink coffee, soda, or anything else that contains caffeine while pregnant, ask your doctor — that's what they're there for.

What's more, mom-shaming isn't cool. Keep your opinions to yourself, no matter what. See a pregnant woman doing something you don't like? Meditate on it for a second and move on. At the end of the day, the actions of other people don't have anything to do with you. It's as simple as that. And on that note, hats off to this mama who handled mom-shaming like a pro.

More Like This
Viral TikTok Breaks Down How Beautifully Bluey Depicts One Character’s Infertility
Ginger Zee Had A Perfect Response After A Troll Asked Her "Who's Raising Your Kids?"
Is It Safe To Keep Using Period & Fertility Apps In A Post-Roe America?
Reddit Is Not Impressed With Dad Who Hid Neighbor's Gnome Because It Scared His Kid