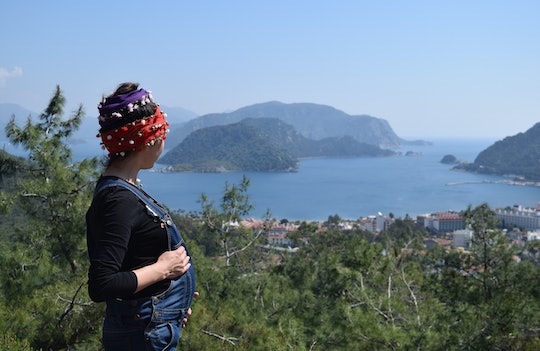 In case you haven't noticed, the world in which we live primarily caters to the needs of (white) men. It's why feminine hygiene products are still taxed in most states. It's why breast pumps sucked so badly for decades. And it probably has a lot to do with the fact that guaranteed paid maternity leave still isn't a thing in the U.S. (Which is exactly why we still need more women in positions of power — whether it's as lawmakers, CEOs, etc.) Recently, this pregnant woman's furious tweets over lack of maternity outdoor wear went viral. And we can do so much better.

Kasie Hunt, an MSNBC News anchor, is expecting her first child, as The Hill reported. The mom-to-be, 33, revealed her pregnancy on Morning Joe in March, according to the publication. It didn't take long for Hunt — who is due in August —to make an infuriating discovering about outdoor wear (or lack thereof) in maternity sizing.

On April 30, Hunt took to Twitter to let off some steam. Because, as it turns out, maternity outdoor wear is practically non-existent. "I was just looking for some basic maternity outdoor clothes for an upcoming trip," she tweeted on Tuesday. "Turns out, most outdoor retailers try to carefully maintain a rugged, masculine image. Pregnancy is apparently not part of that. This is an absolute joke." And you can bet she didn't stop there.

Hunt proceeded to call out several prominent companies, such as REI and Patagonia, that offer exactly zero outdoor wear options for moms-to-be. "Turns out I am not (surprise!) the first woman to have this problem" she wrote, also sharing an article written by Amy Montemerlo Roberts for Fortune. "@amymontemerlo wrote an excellent piece on all of this in which she asked these companies to comment last summer."

"Here's what @patagonia had to say at the time," Hunt continued. She then included a quote from J.J. Huggins, a press spokesperson for Patagonia.

It is just not something we are doing right now, but a lot of the stuff we make can carry over. Everything we make should hopefully have more than one intended use.

As Hunt pointed out, several other major outdoor retailers — such as REI, Icebreaker, Backcountry, and Athleta — either refused to comment or didn't respond to questions related to maternity/nursing-friendly options. "Don't worry, you can get your infant some technical gear for your hike!" Hunt wrote. "Just hope you don't need to nurse the baby, because YOU, mama, are SOL!"

She did, however, give a shoutout to the select few small companies that do offer outdoor wear in maternity sizes. "There are a few small companies — like @MountainMama — that get it," the mom-to-be tweeted. "But otherwise it's pretty obviously: Dudes are making outdoor clothes for other dudes. Thanks, but no thanks."

Hunt finished the thread by sharing her favorite quote from the Fortune article. It came from Teresa Delfin, owner of Mountain Mama — which is California-based outdoor clothing and gear company that specializes in maternity/nursing options. Delfin said:

I’ve talked to executives in many prominent outdoor companies and there is a concern that the inclusion of maternity could undermine brands built on the notions of ruggedness, bravery, boldness, and strength.

I don't know about you, but that is absolutely ridiculous. Anyone who has been pregnant can tell you: Growing a human is no walk in the park. And offering maternity sizing certainly doesn't take away from any reputations of "ruggedness, bravery, boldness, and strength." *Sigh*

I found myself in a similar situation during my second pregnancy. Because I realized there is a serious lack of (affordable) maternity winter coats out there. Even if I would have bought a regular coat a couple of sizes up, it still didn't zip over my bump. What I ended up doing was layering maternity clothing with my husband's hoodie sweatshirts. It wasn't ideal. But unless I wanted to drop some serious cash, that was what I had to do.

Ski mountaineer Kit DesLauriers (who is on the North Face's athlete roster) summed it up perfectly during an interview with Outside online. "It’s not just empowering women, it’s a good business move," she said, of adding a small maternity line to the brand. "It says, We hear you, we acknowledge you, and we want to support you in every phase of your life."

Amen. Because newsflash: Pregnant women still do strenuous activities outside. And moms-to-be go outside when it's cold. So can we please all agree — and demand — that companies can do better?