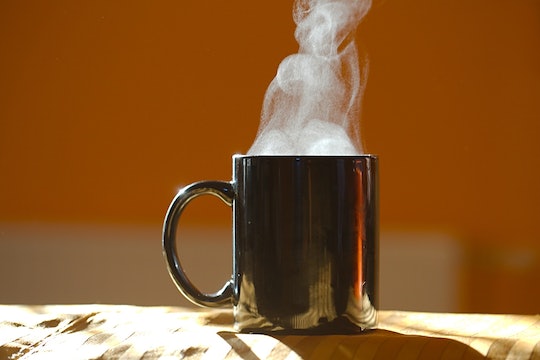 After nine long months of carrying around another human being, many pregnant people are ready to try just about anything to get their labor going. From spicy foods to sex, a number of techniques have been rumored to jumpstart labor, but not all at-home remedies are created equally. Pregnant women are now coffee steaming their vaginas to induce labor and doctors warn that this could come with some serious risks.

This new DIY remedy for delayed labor involves using coffee to start contractions, and no, you don't drink it. Instead your supposed to "steam" your vagina with it, according to the parenting blog Family Friendly. The caffeine is intended to "stimulates the uterus to contract," while the steam is meant to loosen the mucus plug. The provided steps are as follows:

Cafe Mom reported that the method has been circulating online since about 2013, but has been popping up recently as well in the form of personal anecdotes involving the "coffee potty." While it sounds to me like a serious waste of good coffee, doctors are also warning that it could be dangerous.

Dr Patrick O’Brien, a spokesperson for the Royal College of Obstetricians and Gynaecologists (RCOG) told Netmums that not only does the technique probably not work, but it sounds risky as well, saying:

There is absolutely no evidence to show that ‘coffee pottying’ is beneficial in starting or speeding up labour. This method could potentially be harmful to a woman and her baby.

Dr. Amos Grunebaum, OB-GYN and women's health expert for Fairhaven Health agreed that there is no reason to believe that the "coffee potty" works, and he also thinks that it sounds dangerous. In an interview with CafeMom, he said:

What's even more concerning is that using boiling water, especially with coffee grounds, next to your body -- and for that matter, an especially sensitive part of your body -- can lead to serious burns. I work in a hospital with a major burn unit, and about two million Americans are burned each year. Most burns are from hot liquids, and having seen many burns I can only tell women to be very careful when getting close to boiling and heated water.

If you're considering popping a squat over a pot of hot Joe, please, just don't.

In fact, Baby Gaga recommends that you avoid any form of steaming or douching during pregnancy — either with or without caffeine. Along with the risk of burning some of your most sensitive areas, there is also the risk of a painful yeast infection caused by an upsetting of the delicate balance of bacteria. Overheating may cause bad bacteria to run amok and cause thrush, a vaginal infection that can potentially spread to your baby during birth if left untreated. There is also the risk of drying out your vagina by steaming it, which would be uncomfortable as well.

So, there you have it. As frustrating as it may be when that little bugger isn't ready to come out after what feels like a never-ending incubation period, trying wacky home remedies to induce labor may be a mistake. Rest assured knowing that there are plenty of ways for medical professionals to induce labor if you go too far past your due date. But most likely, the baby will come when they are ready — no matter how much coffee you do or don't waft up at them.

More Like This
Pelvic Pain During Pregnancy: What Causes It & How To Deal With It
What Is Acid Reflux Tape? Chrissy Teigen Swears By It
D-Mer Syndrome: Will It Come Back Again?
Parents Are Missing Work At Record-Breaking Rates To Take Care Of Sick Kids