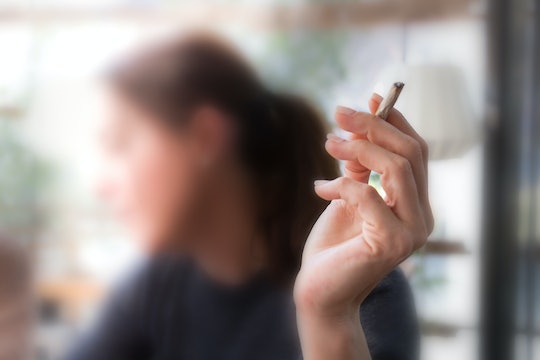 Pregnant Women Are Smoking At An Alarming Rate In This State, & Here's Why

On Wednesday, the Centers for Disease Control and Prevention's National Center for Health Statistics released a report detailing the rates of pregnant smokers throughout America in 2016. Not only did the findings reveal that one in 14 pregnant people who gave birth in 2016 smoked cigarettes during their pregnancy, according to CNN, but it also identified states with the highest rates of pregnant smokers.

It's no secret that smoking while pregnant can cause harm to an unborn child. A person who smokes cigarettes during their pregnancy, for example, risks having a miscarriage or a premature delivery, according to the CDC. Post-delivery, babies born to a smoker are more likely to have birth defects and have a greater likelihood of developing asthma or dying from sudden infant death syndrome, according to Baby Center. And given all these potential complications, one has to wonder why a person would smoke while pregnant. As the National for Health Statistics' report demonstrates with its findings, the answer is a bit complex and it involves many factors.

Patrick Drake, lead author of the report, couldn't help but notice some glaring trends about pregnant smokers in the National Center for Health Statistics ' data. For starters, the less education a person has, the more likely they are to smoke while pregnant. The report found that the prevalence of pregnant smokers with a high school diploma or GED is 12.2 percent, while pregnant people with a master's degree or higher smoke at a rate of 0.4 precent, according to the New York Daily News. Additionally, race and age played a big role in the findings. Women in their 20s have the highest smoking rates at 10.7 percent, while women aged between 25 to 29 come in at 8.2 percent, according to CBS News.

As for racial statistics, Drake explained, according to CNN:

Non-Hispanic white women were almost twice as likely to smoke during pregnancy as non-Hispanic black women and about six times as likely as Hispanic women.

But what about the data of individual states? The report found that the prevalence of pregnant smokers in West Virginia is a whopping 25 percent. The other states the report identified were: Kentucky (18 percent), Montana (16.5 percent), Vermont (15.5 percent), and Missouri (15 percent), according to HealthDay.

Although there's a lot to dissect here, West Virginia's high stat of 25 percent jumps out to me immediately for a few reasons. For starters, West Virginia is struggling to provide adequate prenatal care to its pregnant residents. Studies have found that many counties in West Virginia lack qualified OB-GYNs and other practitioners, and many pregnant people in the state have to travel hours just to receive care. In fact, only six counties in West Virginia were considered to "have adequate medical manpower to meet the population need," according to a report from the West Virginia Department of Health and Human Resources.

When you consider that many pregnant people aren't getting the care they need, it makes sense that the smoking rate is so high. It goes without saying that the more care a pregnant person receives, the healthier their pregnancy will be. Not to mention, some people aren't aware of the risks smoking can cause (there's a lot of misinformation out there) and they need a health practitioner to educate them on these issues.

Additionally, a 2016 report found that less than 20 percent of adults in West Virginia obtained a college degree, according to HuffPost, and the state has long struggled to improve its college attainment rates. And when you consider education is a big factor in smoking rates among pregnant people, it's not shocking that West Virginia has the highest statistic.

As for the state that has the lowest rate of pregnant smokers, California takes the spot at 1.6 percent, according to CNN. In comparison to West Virginia, California reports higher stats of women receiving prenatal care and it has a higher rate of high school graduates. Clearly, there's a link between a person's access to healthcare and education when it comes to smoking while pregnant.

That all being said, hopefully this report will draw awareness to the fact that smoking while pregnant is a complex issue that needs to be examined on a deeper level.

More Like This
Kids With Head Lice Don't Need To Miss School, AAP Stresses In Updated Guidelines
What Parents Need To Know After DEA Issues Warning About "Rainbow Fentanyl"
17 Pictures Of Positive Covid Test Results
Here’s How To Keep Your Baby Safe When Their Older Sibling Is Sick

This article was originally published on Feb. 28, 2018