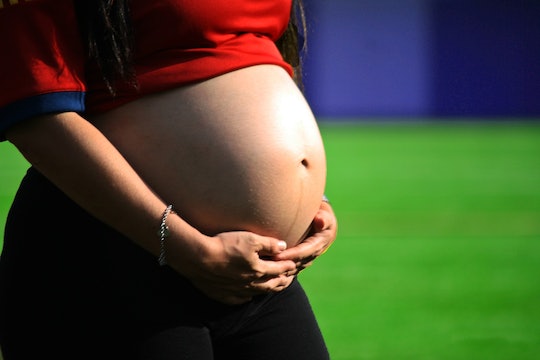 Gaining weight is a staple of pregnancy, just like late-night cravings and morning sickness. But as society at large pushes the ideal that women should get back to their "pre-baby bodies" ASAP after giving birth, a new global study revealed that it's important for women to pay attention to how much weight they put on — or don't — during pregnancy, too. And the reasons are far from aesthetic. The comprehensive analysis of 1.3 million pregnancies from the United States, Asia, and Europe showed that 70 percent of pregnant women aren't meeting their weight-gain goals, which has been correlated with negative outcomes for their newborns.

There's no one golden figure for how much weight a woman should gain over the course of her pregnancy. Rather, the Institute of Medicine (IOM) hinges its recommendations in that department on a woman's pre-pregnancy body mass index (BMI), according to Reuters. For women who are a "normal weight" (about 125 to 168 pounds if they're 5 feet, 9 inches tall) pre-pregnancy, the ideal weight gain is between 25 and 35 pounds. But the new study, which reviewed past studies and was published Tuesday in JAMA, found that 47 percent of women gain too much weight, while another 23 percent don't gain enough.

Normally, I'd say to hell with arbitrary policing on pregnant women's bodies, but these aren't exactly the random beauty standards á la the expectation for women to get their pre-pregnancy bodies "back": Reuters reported that women who gained too little weight were more likely to have their babies prematurely, or to give birth to babies who are underweight themselves. On the other hand, a higher-than-recommended weight gain was found to be associated with especially large babies, as well as a higher risk of requiring a c-section.

According to TIME, though, correlation in this study did not automatically translate to causation. "Are women underweight because they are sick, smoking or have an eating disorder?" Mary Jane Minkin, a clinical professor of obstetrics, gynecology and reproductive sciences at Yale School of Medicine said of the study, in which she was not involved, according to the outlet. "There are many medical conditions that people can have. It's hard to say what's causative and correlative in these studies."

Women can calculate their ideal weight gain goals using this simple and useful tool from Baby Center. But just as important as keeping an eye on the scale during pregnancy is simply working to maintain a healthy diet and lifestyle, Extend Fertility chief medial officer Joshua U. Klein told Fit Pregnancy:

Making healthy food choices and staying active with regular cardiovascular activity are just as important during pregnancy as it is outside pregnancy. Sticking to these habits will help most women stay in a very good range for pregnancy weight. For those with more complicated issues, the OB/GYN and/or a nutritionist specializing in pregnancy are great resources to rely on for guidance.

There's a lot to stress about during pregnancy already. Just keep in mind that women need only about 300 extra calories per day, according to March of Dimes, and don't freak out if the number on the scale isn't exactly where it should be.