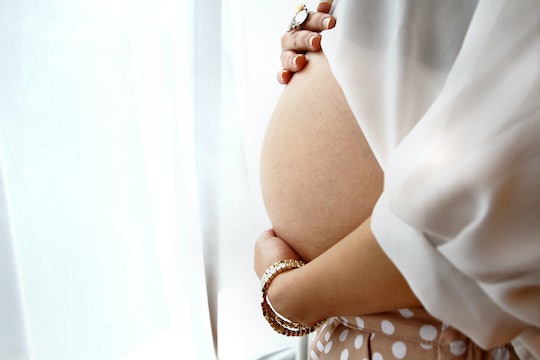 The transition to motherhood is always challenging, but it can come with crippling emotional consequences for some; new guidelines aim to alleviate the burden. On Tuesday, the U.S. Preventive Services Task Force recommended that pregnant women and new mothers get screened for depression, according to NPR. Though the task force advocated screening for all adults, it recognized that undetected and untreated depression can be particularly harmful to both mothers and their babies.

There are many different kinds of depression, but some mothers and moms-to-be are particularly vulnerable. The National Institute of Mental Health reported a distinction between the "baby blues" and postpartum depression; the former is commonly experienced and often short-lived, while the latter is much more severe. According to NIMH, "It is estimated that 10 to 15 percent of women experience postpartum depression after giving birth." Pregnant women and new mothers who experience distressing thoughts may feel guilty, but NIMH said that postpartum depression caused by hormonal changes and sleep deprivation are out of a woman's control. It may manifest as sadness, rage, irritability, or anxiety; it can include frequent crying, trouble sleeping, and even an aching body. Other women will experience similar symptoms before they ever enter the delivery room.

Given the challenges of depression, there are reasons to believe screenings could have a powerful impact on maternal health.

But even with formal support for screenings, it's easy for women who seek treatment (especially during pregnancy) to feel stigmatized. In his article for The New York Times, clinical psychology professor Andrew Solomon said that admitting to depression is often difficult for women:

Much of the stigma around maternal depression — antenatal and postpartum — seems to focus on women who fail at joy, often suggesting that such women are heartless. How can anyone not be swept up by the momentousness of producing a child who will give her life purpose?

While the social stigma is scary enough, many women also fear treatment and worry about the impact of antidepressants on a fetus. Whether to prescribe medication to pregnant women suffering from depression is still debated among doctors, and studies as to the impact of antidepressants on a developing baby don't always offer reassuring results. But in an article for Jezebel, Ellie Schechet argued that women should welcome depression screenings:

Beyond simply recommending screenings for women during pregnancy, the panel said that while the use of some antidepressants could cause 'potential serious fetal harms,' 'the likelihood of these serious harms is low.'

Ultimately, women take control of their own treatment. If a mom is diagnosed with depression, she may opt for antidepressants, talk therapy, or no medical intervention at all. But as Schechet reported, the "B" rating given by the task force ensures that the Affordable Care Act covers screenings. That level of access may provide a lifeline to thousands of women.

More Like This
Here's What Pregnant People Actually Want For Valentine's Day
Mom Gives Birth To Record-Breaking 16-Pound Baby
22 Valentine's Day Pregnancy Announcement Ideas Sweeter Than Candy
Fun, Sexy Maternity Lingerie, For When The Mood Strikes
What Parents Are Talking About — Delivered Straight To Your Inbox