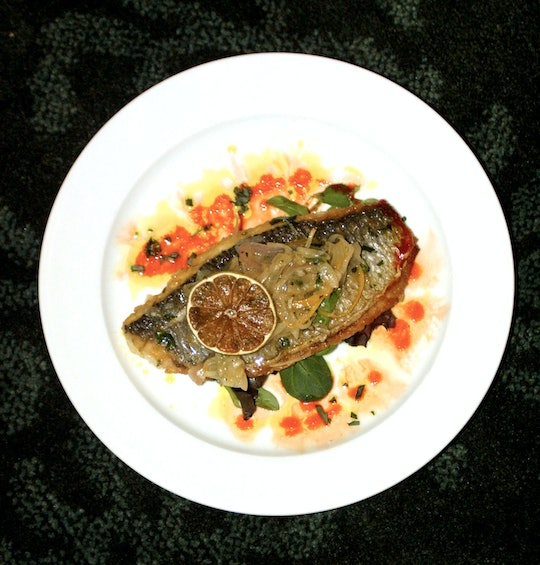 Conventional wisdom (fueled by the recommendations of well-respected health organizations) has long dictated that women should cut back their fish consumption when pregnant. The reasoning for this, as most women who've had a baby probably know, is that the mercury present in this common dinnertime go-to has the potential to hinder healthy neurodevelopment in babies-to-be. But, in reality, the story is not so simple — and that means that being pregnant doesn't necessarily mean that women have to forgo chowing down on crab legs or enjoying some clam chowder. In fact, U.S. Food & Drug Administration officials both current and former believe that pregnant women should eat more fish instead of avoiding it.

As Slate reported, 12 experts who are or have been affiliated with the FDA formally requested on Thursday that the administration change its current guidelines suggesting that pregnant women eat between 8 and 12 ounces of fish per week. The new recommendation was implemented in January, slightly tweaking the previous language, established in 2001, that pregnant women limit their fish intake to 12 ounces per week — language that took a precautionary posture against the mercury in fish and the long-held belief that it could be dangerous.

So why did the guidelines change, and why are the researchers pushing for the FDA to trumpet the advantages of eating fish rather than focusing on the potential harms?

Essentially, researchers initially determined that the mercury that oftentimes occurs naturally in fish is harmful based on a study the National Academy of Sciences conducted in 2000, as Slate's Annie Behr chronicled. The problem was the location of the study: the Faroe Islands between Iceland and Norway. There, people eat pilot whale, which "can have 100 times the concentration of methyl mercury compared to fish, as well as high concentrations of PCBs and other chemicals," Behr wrote. So, even though scientists found that kids with significantly higher prenatal mercury exposure had about 2.2 fewer IQ points by the time they turned 22, there was obvious concern within the scientific community that the results were skewed based on extreme mercury consumption at the study location.

On the other hand, eating normal amounts of fish has been associated with higher IQ and other neurological benefits — leading the scientists who submitted the petition to believe that the fear-based stance associated with capping fish intake is inherently faulty. For example, Live Science reported in February 2016 that researchers in Spain had found that children of mothers who ate three or four servings of fish per week while pregnant had higher IQs by 2.8 percent than those of moms who, for whatever reason, made a meal of seafood less frequently. Through this and other similar studies, scientists have come to realize that the omega-3 fatty acids, which are often present in fish with mercury, are actually crucial to brain growth and development.

So, in theory, fish an be both harmful and beneficial to a developing brain. But here's the rub: Women would have to eat huge amounts of fish containing mercury for their babies to experience more harm that brain boosts associated with fish in their diets. As Behr summarized:

... You'd have to eat 774 ounces and 173 ounces per week [of low-mercury fish like salmon and cod], respectively, for the risks to outweigh the benefits. A serving a fish is usually 4–6 ounces — and no one eats cod three times a day, seven days a week. Even for fish with medium amounts of mercury, like halibut, you’d have to eat roughly 72 ounces a week for the risks to outweigh the benefits.

For the experts who signed the petition, making that clear is essential to ensuring that women are fully informed when making decisions about what to eat when they're expecting. "Advising how to get the most benefits for brain and nervous system development is a big change from advising how to stay safe from harm from methyl mercury," Philip Spiller, the former director of the FDA's Office of Seafood, told Slate.

Right now, those who want to research this topic more fully can use the chart the FDA developed detailing how much mercury exists in certain types of fish. It categorizes them as "Best Choices," "Good Choices," and "Choices to Avoid." Targeted also toward young children, the FDA's chart suggests that pregnant women eat between two and three servings per week of different fish from the "Best"and "Good" choices list.

Like much of the research into what makes for a healthy pregnancy and baby, the answer to the question of whether to eat fish while pregnant is evolving. Women should always stay up-to-date on research and consult with their doctors when determining which food choices are right for them.