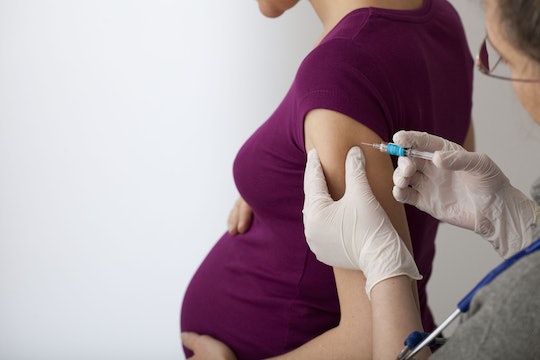 The decision to vaccinate or not — especially while pregnant — has become a heated issue for many parents. Certainly, being wary about what babies are exposed to while in the womb makes sense. But, given the decades of peer-reviewed medical research on the safety and efficacy of vaccines, this is one area where pregnant mothers and parents-to-be may be able to breathe a bit easier. In fact, just recently a new Centers for Disease Control and Prevention study showed that getting the tDap vaccine toward the end of pregnancy can help guard babies from whooping cough during those early months when babies are most susceptible to infection. In fact, according to the CDC website, the new findings suggest that babies born to pregnant women who get the tDap vaccine have a three in four chance of avoiding the illness altogether. Still, despite the encouraging evidence, not enough moms-to-be got the vaccine in time to protect their newborns, the agency reported.

According to the press release posted on the CDC website, the study examined data from 2011 to 2014 on babies 2 months of age or younger, taken in six different states. The findings were straightforward: babies who tested positive for pertussis — the virus that causes whooping cough — were found to be less likely to be born to a mother who had gotten the tDap vaccine during pregnancy.

And when it comes to infants, getting whooping cough is often serious — even lethal. The highly contagious disease is usually passed through coughs or sneezes, inflaming the lungs and airways, according to a separate fact sheet on pertussis posted on the CDC website. That’s one of the reasons that newborns are especially vulnerable to suffering serious complications from the disease, including pneumonia, convulsions, brain damage. In fact, according to BabyCenter, young infants may not even be strong enough to make the characteristic whooping sound that often signals whooping cough infection; instead, very young babies may turn blue or stop breathing altogether.

According to the CDC’s press release on this latest study, somewhere between five and 15 babies die from whooping cough each year in the United States, with most fatalities occurring before the baby is old enough to receive the vaccine themselves. That’s why timing the vaccination for the right time in pregnancy is so important. The study authors found that babies were best protected when mothers received the tDap vaccine during the third trimester of pregnancy, or anytime after the 28th week of gestation.

But given the current discourse around vaccine safety, convincing mothers — and all family members and caregivers in their home — to get the tDap during pregnancy can be a challenge. When it comes to vaccines typically given to babies and children, some states have sidestepped the ethical questions and public debate by simply adding red tape to the process of obtaining waivers to vaccine laws, effectively boosting compliance rates without much fanfare or outcry from anti-vax groups.

But because getting the tDap vaccine is voluntary for pregnant women, communication and outreach take on far greater importance. In fact, in its most recent announcement, the CDC reported data showing that only 49 percent of pregnant women who gave birth anytime between the fall of 2015 and spring of 2016 got the tDap vaccine.

Those aren’t great numbers. And, as with all medical concerns during pregnancy, if you have questions, speak to your doctor. But given the encouraging findings for babies whose mothers get the tDap vaccine, this may be one prenatal decision that moms-to-be can relax about.