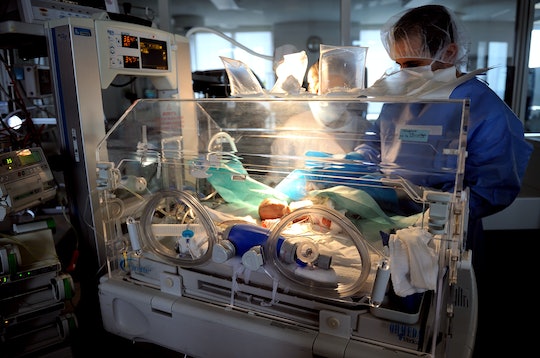 Researchers from Harvard think they've made a big breakthrough in helping premature babies mature faster. When it comes to benchmarks for eye tracking and pupil dilation (two indicators that reveal how well preemies are developing), babies who were serenaded by natural sounds similar to those they would hear in their mothers' wombs performed better. For example, pre mature babies matured faster if they heard their mother's voice. Sweet, right?

Amir Lahav, a neuroscientist, explained his findings at the American Association for the Advancement of Science over the weekend. Babies who are placed in incubators in intensive care units for long stretches of time often don't hear anything but the sounds of machines beeping and fans whirring, and Lahav said those sounds might actually be delaying their maturation. For the study, 12 mothers with premature babies were asked to record themselves talking, reading, and laughing. Those sounds, along with recordings of the mothers' heartbeats, were played inside their babies' incubators for a few hours a day, and the results showed the babies who were able to hear their mothers did better than those who didn't.

Premature Babies who heard their mothers voices grew larger corpus callosums, or the fibers that connect the brain's two hemispheres, according to researchers who measured the premature babies' heads and performed ultrasounds to monitor brain development. The babies who heard similar sounds to their mothers' womb were also had improved development of their auditory cortex, the part of the brain that enables hearing.

Lahav said the results go a long way in proving that the everyday sounds of mothers are "part of the original recipe for how we should cook premature babies up to full maturation."

The results make me wonder whether the benefits of hearing a mother extend beyond the very early weeks or years after birth. Also, does the type of sound matter? Does hearing me belt out Madonna lyrics do anything for my elementary school-aged kid? And, is my habit of talking to myself through grocery store doing more for my daughter than just embarrassing her in front of complete strangers? Enquiring minds and all of that.

Because I'll tell you the reverse is certainly true: the sound of my daughter's endless prattle is just about the sweetest sound in the world. As she plays and rides in the car, I'm constantly treated to a running dialog about her toys, her friends, and how much she loves her daddy. Not that I need any help in the aging or maturity department, but hearing the stuff that's going on inside that pretty little head does my heart plenty of good.

Let's hope this development leads to cutting down the time those tiny little premature babies have to spend in the hospital and away from their families and in neonatal intensive care units. Hopefully this also serves as a reminder of how much influence the sound of our voices have on our little ones, even if most parents think some of what they're saying is just mindless prattle.