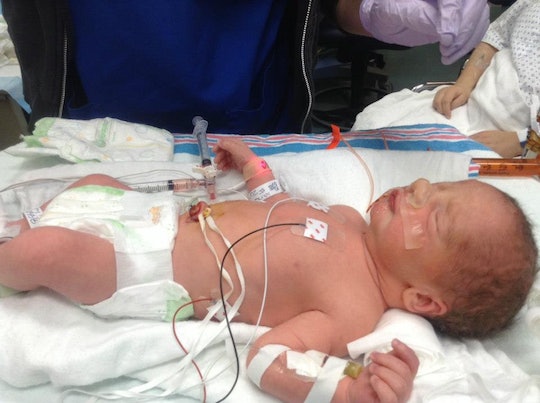 When I found myself a newly minted member of the NICU parents club, what struck me is how the being in the neonatal intensive care unit is one of the few times when art imitates life and gets it right, when what you see in movies is just like the reality. The NICU is doll-sized babies draped in tubes in wires quarantined in isolettes. It's parents huddled together after stoic conferences with doctors, mom still in her hospital gown. It's timing your breath with the beeps from the machines and holding it in those awful moments when the monitors start to sing. Having a baby prematurely (or in my case two) is a terror far worse than anything Guillermo del Toro can dream of.

Becoming a parent immediately pushes love and joy into spaces of yourself you didn't know existed. But then that baby is whisked away from you and handed to a team of doctors before you've even had a chance to recognize yourself in his eyes. The pain of that separation burns like the hot water you're forced to wash your hands with every time you enter the unit. While they were in the NICU, I refused to let anyone refer to my sons as little angels, lest it give some higher being an idea.

And still, I was one of the lucky ones. Even though my boys arrived almost two full months before I was expecting them, their NICU stays were short and fairly uneventful as these things go. Remy spent a week in the NICU to gain weight before my partner and I got into our first parent squabble over how to tighten his carseat straps. His brother Lolo spent an extra week charming the nurses, building up his lung strength, and having his heart monitored due to a minor defect before coming home.

I won't pretend it was fun only getting to hold them for a few minutes each day because their nerves were still developing or that I liked saying goodbye to my babies each night. I wanted to be feeding them at 1 a.m., not hooked up to a breast pump and calling the NICU to check in, wondering if those cries in the background were my children demanding to know where I was. But compared to other preemie parents I know, our NICU story was straightforward, unremarkable, easy. In fact, when I think of the many ways having preemies rocked my world, those first few weeks in the hospital are pretty far down the list.

Having a preemie in the hospital is hard, but caring for one at home can be tougher, especially if you're learning the ropes as a first-time parent.

Because what those hospital dramas and Lifetime movies don't show you is what happens when a preemie comes home. The NICU has amazing technology, but it's not an artificial womb. Going home, or "graduating" as they call it, doesn't mean you magically have a full-term baby that's developmentally typical, even once they've been earthside past their 40-week due date. Having a preemie in the hospital is hard, but caring for one at home can be tougher, especially if you're learning the ropes as a first-time parent.

For example, one night when Remy had just come home, I dropped the phone handset on him after calling the NICU in the middle of the night to check on his brother. Any nervous new mom would feel awful for beaning their baby with a phone, but I had more reason to freak out than most- that half pound handset was over an 1/8 of his body weight. I figured it was the equivalent of someone dropping a 20-pound weight on my stomach while standing three feet above me. One freaked out visit to the pediatrician later, we determined he was fine, but it was a glaring reminder just how delicate my little babies were.

Yes, it's fun to squeal over how teeny preemie onesies and diapers are, but not all baby gear is friendly to those who RSVP early to Earth. I thought using a baby carrier would be a great way to make up for lost snuggle time, but my core muscles were too weak from having spent months on bed rest to handle any of the wrap-style carriers. And any structured carrier I found had a minimum weight requirement of 8 pounds, which took my boys months to reach. They were even too small for the swing my friends had given me for my baby shower. This meant lots of pacing around the house holding each of them in turn as needed. Which would have been doable, if my own body didn't feel like a pile of rags held together with a nursing bra. Trying to care for preemies made it that much harder to get the postpartum care I desperately needed.

Some women find themselves surprised by their preemie mom status after an otherwise healthy pregnancy. Their water breaks weeks ahead of schedule, or what should have been a routine checkup reveals she's actually having contractions. For others like me, a premature birth comes after weeks of fighting to stay pregnant. I was on bedrest for nearly two months before my kids were born. While that may sound like weeks of Netflix-filled heaven, laying still for so long made it harder to be on my new mom game. After giving birth I struggled to even walk from the couch to the fridge without jaw-gritting back and hip pain. Going to the basement to put in a load of laundry would make my thighs shake like I'd just done a ton of squats.

All those fun things you imagine doing with your baby — having playdates with friends, going to the park, even spending the holidays with the family— become more complicated with preemies.

On top of it all, I was recovering from a c-section. Everyone would tell me how important it was to rest, but the pediatrician stressed that feeding my babies every three hours like clockwork was vital to their growth and development, even if that meant waking us all up to make it happen. There simply wasn't time to worry about my own health because when I wasn't caring for my babies, I was worrying about their long term prospects.

According to the March of Dimes, around one in ten babies born in 2016 were preemies. That's over 380,000 babies born before their 37th week of gestation in 2016. And while the survival rate for babies born beyond their 26th week is over 90 percent, the list of health conditions your preemie may be up against is long and scary. Preemies can face intestinal infections, have heart conditions, experience developmental delays, have hearing loss, deal with vision issues and even have long-term dental problems.

These means that beyond the intense schedule of typical well visits infants have with their pediatrician, I was also regularly packing up the carseats for trips to specialists. Neither my aching c-section scar or my bank account was thrilled about all these trips in and out of doctor's offices and hospitals.

Babies' eyes develop a ton during the last three months of pregnancy, most of which my sons skipped. When a baby is born prematurely, some of the blood vessels in the retina may not full develop or can scar, leading to a condition known as retinopathy of prematurity (ROP). ROP can be mild, require those teeny baby glasses or in extreme cases lead to blindness. So off to the pediatric ophthalmologist we went for checkups to make sure everything was literally in the clear.

Like a lot of preemies, Lolo was born with a patent ductus arteriosus (PDA), which is a scary sounding name for a tiny hole in the heart that's supposed to close soon after birth, but in his case, didn't. In addition to all our other appointments, we had to take him for regular monitoring via ultrasound and other scans to check for progress. Luckily Lo's closed on its own when he was around six months old, but some preemies end up needing medicine or even surgery to close their PDA.

There are a lot of extra things preemie parents have to do for their kids, but there are also things we don't get to do as a result of our special status. All those fun things you imagine doing with your baby — having playdates with friends, going to the park, even spending the holidays with the family— become more complicated with preemies. Germs are scary for all infants, but even more so for preemies still developing. Once the boys came home we became hermits out of fear of germs. I ventured out only for doctor appointments, and my husband went to work and came home, making pit stops at the grocery store only when we had gone through all the canned goods. We bleached doorknobs and went through a family-sized tub of Purell each week. In spite of our precautions, my boys still managed to catch a nasty virus called RSV and spent their one month birthday back in the hospital.

These days my kids spend less time in doctors' offices and more time playing doctor, as they should. But their status as preemies is forever in their medical charts, and I'm constantly on the lookout for ways that being born too early may be impacting their development. The challenge of having preemies was so stressful that I chose not to have any more kids rather than risk going through it again, both for the child's sake and my own. Everyone thinks bringing your baby home from the NICU is the happy ending, but really it's just the beginning a stressful story without a final chapter.

More Like This
The Euphoric Terror Of Rollerskating Was Exactly What I Needed
Here's Why Wearing Long Sleeves In The Summer Can Be Good For Your Baby
How To Breastfeed A Baby With A Cleft Lip Or Cleft Palate
Can You Get The Covid Vaccine For Kids Under 5 At Publix?