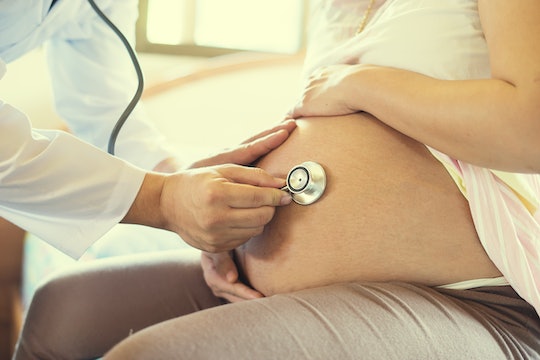 Not much is known about how anemia in early pregnancy can affect a fetus' brain development, which is why researchers at the Karolinska Institute in Sweden set out to explore this relationship. Now researchers say they've found a potential link between prenatal anemia and neurodevelopmental disorders in kids, according to a new study published in JAMA Psychiatry on Sept. 18.

The analysis of more than half a million babies born in Sweden born between 1987 to 2010 and their nearly 300,000 mothers found that anemia in women before their 31st week of pregnancy was linked to a heightened risk of autism, ADHD, and intellectual disability, according to researchers at the Karolinska Institute.

“The brain uses a lot of energy and oxygen. If you can’t transport enough oxygen, the brain can’t function as well," the study's lead author, Renee Gardner explained about the potential relationship between anemia and neurodevelopmental issues, according to Spectrum News.

The study found that these links dissipated later in the pregnancy, meaning that anemia diagnosed later than 31 weeks was not associated with a higher risk for any of these aforementioned conditions. Therefore, diagnosing women with anemia early on in pregnancy is key.

As Gardner noted, this can be problematic. "A diagnosis of anemia earlier in pregnancy might represent a more severe and long-lasting nutrition deficiency for the fetus,” Renee Gardner said, according to the International Business Times. "Different parts of the brain and nervous system develop at different times during pregnancy, so an earlier exposure to anemia might affect the brain differently compared to a later exposure,” she added.

It's important to note, however, that other factors could have played a role in the study's findings. Women with anemia in the study were also prone to other dietary deficiencies associated with the disease, and these issues possibly could have affected the research.

Not to mention, the study doesn’t show a direct link between anemia and the potential disorders, but rather a "casual connection." This can be linked to complications associated with the diagnosis, as "preterm birth accounts for more than 70 percent of the link between anemia and autism," according to Spectrum News. Additionally, "preeclampsia, a condition associated with dangerously high blood pressure, also accounts for a small proportion of the link."

Dr. Nevert Badreldin, an assistant professor of obstetrics and gynecology at Northwestern University’s Feinberg School of Medicine, explained to Reuters: “It’s hard to assess, based on this information, whether the anemia is in fact creating the association or whether the higher rates of neurodevelopmental disorders are related to something else the women (with anemia early in pregnancy) have in common."

Still, this doesn't change the fact that early screenings for anemia are important. “Given that iron deficiency and anemia are common among women of childbearing age,” the authors said in the study, “our findings appear to emphasize the importance of early screening for iron status and nutritional counseling in antenatal care.”

Although early screening and diagnosis of anemia is helpful for treatment, the study was not able to determine the effects of timely and effective treatment — often iron supplements — on children of anemic women diagnosed prior to 31 weeks.

“Our results would support a potentially protective role of iron supplementation in pregnant women,” the authors say, noting that iron supplements can prevent iron deficiency anemia and that supplement intake is associated with reduced risk of low birth weight and preterm birth, according to the Mayo Clinic.

Of course, if you have any concerns about this study or anemia in pregnancy, don't hesitate to speak with a trusted medical professional.