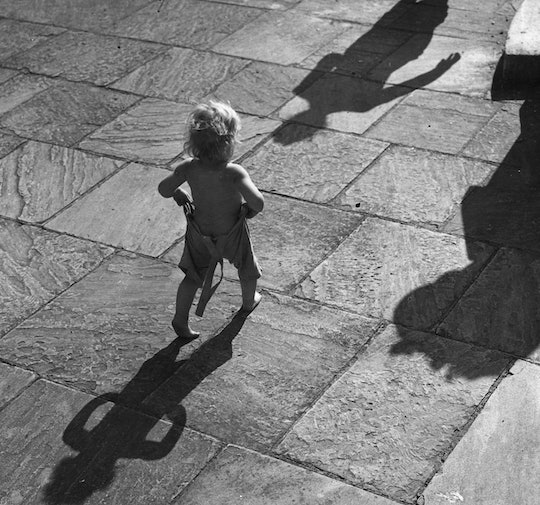 Raising Happy Kids In An Anxious World Might Mean Backing Off

My 3-year-old is going through a potty-training regression and my husband still allows his mother to fold his washing, sometimes. In that respect, we are the quintessential millennial family: we are worried about hitting milestones, and parent our children even more intensely than our own parents did, occasionally taking breaks from the crush of work and home life to arrive, harried and helpless, with a gigantic bag of laundry at the in-laws' house, a step further along the intensive-parenting progression from the generation before.

The stakes seem higher now than in the boom time of the '80s when I was a child, and we parents are not imagining that pressure: Income inequality is at a near-record high in the U.S. and childcare costs almost as much as college tuition in some states, meanwhile almost 1 in 3 adolescents are affected by an anxiety disorder, according to the National Institutes of Health. Around 7% of children aged 3 to 17 have anxiety. We worry about our kids, and that worry in turn affects them.

Anxiety is the number one mental-health diagnosis for children, but also for parents, points out New York Times-bestselling psychologist Madeline Levine, Ph.D., who has just released a new book offering a path forward, Ready Or Not: Preparing Our Kids To Thrive In An Uncertain And Rapidly Changing World. Spoiler: we won't prepare our children by catering to their every little need, so much as raise helpless adults incapable of coping with stress.

At age 4 or 5 or 6, anxiety is 'incredibly treatable,' says Levine.

Levine previously drilled into the ill effects of helicopter parenting in The Price Of Privilege, focused on the kind of success-oriented parenting she sees in Marin County, where she practices, but her message here is even more urgent. "I spent 12 years on the road along with my colleagues talking about mental health issues and guess what?" she tells Romper. "They are getting worse." As pediatric mental-health conditions rear their head earlier and earlier, thanks to a stew of workism, social media, inequality, materialism, and existential climate threats, it's important that parents address these issues. At age 4 or 5 or 6, anxiety is "incredibly treatable," says Levine. Six weeks of cognitive behavioral therapy with the child and parent is enough to change the dynamic and give the parent some solid child development skills.

But, she says, the instinct among caring, attached parents is often to solve the issue themselves. When their child develops a phobia or anxious response to something, the parents "start filling in and accommodating to anxiety around normal developmental things," rather than asking their doctor for reasoned advice. Picture the parent who brings the scared child into their bed, or cooks an all-yellow suite of acceptable foods for a difficult eater every night.

In her practice, Levine sees "the trajectory of a parent whose kid has terrible separation anxiety, say, in preschool, and then it gets a little better, and then the kid goes to elementary school and is beside themselves and throwing up, and then that kid moves on to middle school and they become school-phobic, and then they go to college and they have to come home." At that point, depression or anxiety are harder to treat, and may involve secondary diagnoses.

Levine uses the term "accumulated disability" to describe the effect where "you've robbed the child of the opportunity to learn that this [is] anxiety they're going to encounter and they can manage it."

That kind of understanding, that that kid is going to have to fall a hundred times before she can walk, is easy to do with a toddler

Back to a certain 3-year-old I know who recently took a poop on my living room rug, the instinct is to manage the situation: become intimately involved in the routine of my son's bowels; hover; catch the pooper in the act. This same child took his first steps at 9 months of age, so cerebrally green that he spent months bonking himself black and blue on the furniture until he was steady on his feet. We would tell him to try again, cheering and helping him only if he really needed it. We were, at that point, empowering him to figure it out himself.

"That kind of understanding, that that kid is going to have to fall a hundred times before she can walk, is easy to do with a toddler," says Levine. But watching our kids flail later on becomes harder. "All this over-involvement that people think is in the best interest of children, I think really works against the best interest of children," she says.

Perhaps we could turn that attention on ourselves. "I'm a big believer in if you're going to be a parent, get to know what your issues are," says Levine. "That doesn't mean being in analysis the next 10 years, it means six sessions talking about how that might interfere with your children and the way you parent and where your particular anxiety comes."

Parent-based treatment of a child's anxiety was found to be as effective as CBT in a 2019 study by Yale researchers, published in the Journal of the American Academy of Child & Adolescent Psychiatry.

Another piece of the puzzle? Worry less about when other kids are hitting various milestones, and be selective about whose expertise you take in: "The best first person to ask is your pediatrician. You have seen two children; your pediatrician has seen 2,000 children."

We recently put my son in charge of his own underpants, deputizing him to know when is time to go potty, and explaining that this was now his responsibility. Perhaps it's the fact that those underpants are covered in bananas, but he stepped up to the plate like a champ. He has tried like never before to keep those bananas dry. After a bumpy start, I expect he will eventually get the hang of things — it's a load off my mind, and if Levine is right, he'll be all the stronger for it.

Ready Or Not: Preparing Our Kids To Thrive In An Uncertain And Rapidly Changing World is out now from Harper.