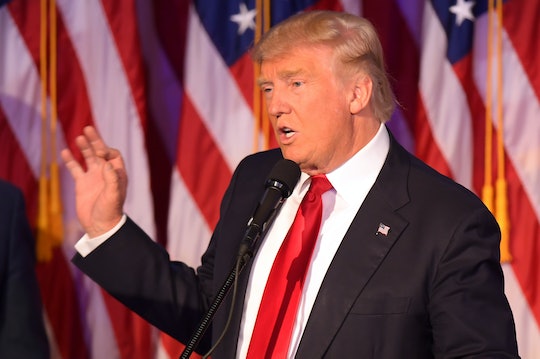 In what I'm sure came as a shock to many people, Donald Trump was elected President of the United States. But whether you're currently out there rejoicing or trying to figure out what to tell you kids in the morning, the election is now officially over and I suppose that counts for something. That madness has ended... but that doesn't necessarily mean the internet still doesn't have a few things to say about the new President-Elect. In fact, if you take to social media right now you will find numerous President Donald Trump tweets and memes that show just how divided in opinion this country really is, even now.

Many believed that this victory would belong to Democratic candidate, Hillary Clinton, anxious to see her break through the metaphorical glass ceiling. So just as Trump supporters are thrilled with the outcome, there are also several voters who are equally disappointed with how all of this played out. And what better way to celebrate your joys (and vent your frustrations) than by making full use of the magic of social media? And that's precisely what people people proceeded to do. So come one, come all and see what your fellow Americans had to say about this latest development in our nation.

Some People Were Thrilled

Suffice to say, the world is still pretty divided and I doubt that fact is just going to go away overnight. What I don't doubt, though, is that we all will make it through this no matter what and work toward creating a world that we (and our children) can be proud of.