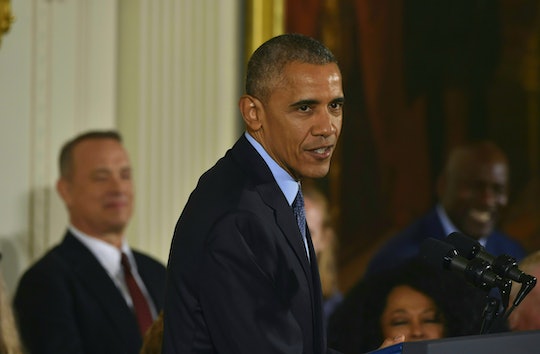 On Tuesday, in an act that reminded many Americans just how much they will miss him come January, President Barack Obama commuted the sentences of 79 drug offenders. He has now granted clemency to over 1,000 low-level offenders, many of whom were sentenced under harsh mandatory minimum laws that are no longer used in court. The number of inmates to whom Obama has granted clemency is record-breaking, but the president has some very important reasons for doing what he's doing.

These prisoners were sentenced under laws that have since been deemed too severe. None of them committed violent crimes, and for many, the crime that landed them in prison was a first offense. Some of these offenders didn't even sell or use the drugs themselves, but were simply mixed up with people who did. On Obama's official Facebook page, his staff featured a video interview with one of those offenders, Ramona, who was dating a man who had gotten involved in drugs. Because she knew of his involvement, she was sentenced to life in prison, through a misleading and unfair court process. (Let's compare this to the average sentence for rape, which is 11 years, according to the Bureau of Justice Statistics, and remember that Brock Turner got a mere six months in jail, plus three years probation.)

There's no reason a person who commits a crime like Ramona's should serve such a severe sentence.

Beyond the fact that it's ridiculously cruel and unfair to lock up a nonviolent drug offender for life (or for shorter but still far-too-harsh sentences), keeping a person in prison costs the taxpayers money. In a 2012 study by the Vera Institute for Justice, the organization found that, in the 40 states that participated, taxpayers paid, on average, over $30,000 per inmate each year.

Add to that is the fact that the punishments for drug crimes disproportionately affect minorities, and that for many of these drug offenders, rehab would likely be better for them than prison, if the goal truly is to help them get better.

Perhaps, as always, Obama said it best, in that same Facebook post where he shared Ramona's video, writing,

At the heart of America is the idea that we're all imperfect. We all make mistakes. We have to take responsibility and learn from those mistakes. And we as a society have to make sure that people who do take responsibility for their mistakes are able to earn a second chance to contribute to our communities and our country. It's the right thing to do.

Obama has another reason for commuting so many sentences at such a rapid speed. As The Washington Post reports, it seems that his successor, President-elect Donald Trump, has no plans to continue Obama's program of mercy.