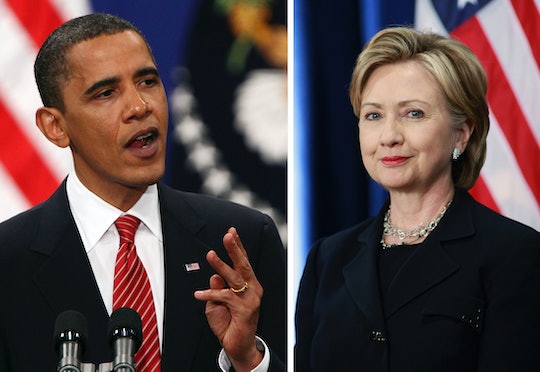 On Thursday, President Barack Obama officially endorsed Hillary Clinton, his former Secretary of State, as the presumptive Democratic presidential nominee. In a video message posted to the Clinton campaign YouTube channel, Obama congratulated Clinton for her hard fought campaign and historic forthcoming nomination. His endorsement comes after a noticeable and lengthy quietness on the matter during the primary season. Obama opened his just over three minute video message by congratulating Clinton's victory as the presumptive nominee:

For more than a year now, across thousands of miles, and all 50 states, tens of millions of Americans have made their voices heard. Today, I just want to add mine. I want to congratulate Hillary Clinton on making history as the presumptive Democratic nominee for President of the United States.

The president continued his endorsement of Clinton by talking about how he understands just how hard the job of being president can be and said that he believes there has never been any other person "so qualified to hold this office." Obama praised Clinton for her courage, compassion, and heart, while knowingly adding that he knows this so well from having debated her more than 20 times in the 2008 election.

Obama described her qualifications and experience for the role of president, especially from her years as Secretary of State. Obama praised her actions when the decision to go after Osama bin Laden was made in 2011, along with her "pursuit of diplomacy." Obama then told Americans "I'm with her" and would so be campaigning for her across the country.

Obama's endorsement also included an important message about party unity, acknowledging and then dismissing criticism that the Democratic Party is more divided then ever. He directly thanked supporters of Vermont Sen. Bernie Sanders, saying Sanders has "run an incredible campaign" and confirmed that the pair met earlier this week. Obama acknowledged Clinton and Sanders' rivalry during the primaries, but that they "share a vision" for America. Obama also praised Sanders for bringing important progressive issues to the Democratic platform, including economic inequality, campaign finance reform, and mobilizing younger voters. The president encouraged voters to get behind those same issues in order to create a stronger Democratic Party and ultimately continue a Democratic incumbency in the White House.

On her official Twitter account, Clinton tweeted "Honored to have you with me, @POTUS. I'm fired up and ready to go!" with a signature "-H" denoting the tweet came directly from Clinton.

More Like This
The President Of Ireland Wants To Get Rid Of Homework & Honestly, He's Onto Something
Keke Palmer Casually Drops Her Baby's Sex On Jimmy Fallon
Freeze! The Single From The New 'Bluey' Album Just Dropped
Josh Duhamel Is Glad He Took Fergie's Advice About Dating After Divorce
What Parents Are Talking About — Delivered Straight To Your Inbox