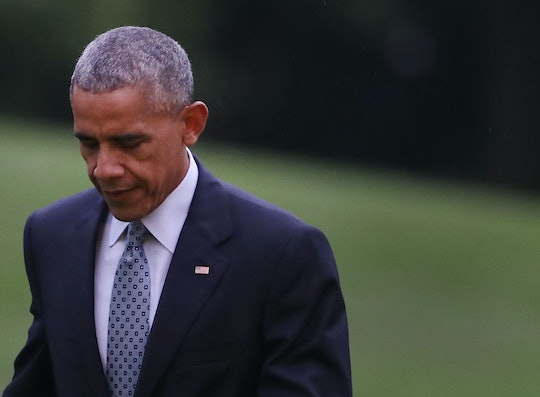 In a town hall meeting with CNN, President Barack Obama took questions from moderator Jake Tapper and audience members, many of which were about terrorism. While Obama is now entering his final months in office, the scrutiny of his policies and attitude around terrorism continues. In the town hall, President Obama explained why he won't say "Islamic terrorism," — and it's a reminder we all need about the Islamophobia that exists in the United States.

On Wednesday, Obama participated in a town hall held at Fort Lee, a military base in Virginia. He took a question from Tina Houchins, who is a member of the American Gold Star families organization — a group for families who lost a child who was in the United States Armed Forces. Houchins asked why the president refuses to refer to the terrorist members of Al Qaeda (and, more recently, ISIS) as "Islamic terrorists."

This isn't the first time, nor will it likely be the last, that the president's preferred terminology for terrorists has been questioned. Presidential hopeful Donald Trump has been one of the most vocal, especially on social media, in criticizing the president's choice to avoid using the term. In the wake of the nightclub shooting in Orlando, which was deemed a terror attack — the deadliest in the U.S. since 9/11 — Trump tweeted about the president:

At the time of Trump's tweet, the president hadn't yet made a statement about the shooting, but when he did, he did not use the term "Islamic terrorist" or "radical terrorists," and many have asked why.

When he was directly asked by a member of the audience at Wednesday's town hall, he had the opportunity to explain why, and to remind us all of the rampant Islamophobia not just in the U.S., but around the world:

There is no doubt, and I've said repeatedly, where we see terrorist organizations like Al Qaeda or ISIL — They have perverted and distorted and tried to claim the mantle of Islam for an excuse for basically barbarism and death. These are people who've killed children, killed Muslims, take sex slaves, there's no religious rational that would justify in any way any of the things that they do. But what I have been careful about when I describe these issues is to make sure that we do not lump these murderers into the billion Muslims that exist around the world, including in this country, who are peaceful, who are responsible, who, in this country, are fellow troops and police officers and fire fighters and teachers and neighbors and friends.

Obama then suggested that if we collectively refer to terrorism as "Islamic terrorism," then why wouldn't be call terrorist acts committed by Christians Christian terrorism?

If you had an organization that was going around killing and blowing people up 'We're on the vanguard of Christianity.' As a Christian, I'm not going to let them claim my religion and say, 'you're killing for Christ.' I would say, that's ridiculous. That's not what my religion stands for. Call these folks what they are, which is killers and terrorists.

He also noted that when high profile voices, especially those seeking public office, brazenly use terms like "Islamic terrorism," it promotes division between Americans — many of whom are Muslim and are not terrorists. When asked if he was referring directly to Trump, Obama said no, adding that the Islamophobia in America is "not unique to the Republican nominee."

Democratic nominee Hillary Rodham Clinton has also weighed in on the use of words like "radial Islam," stating that she would use the term — but with a caveat:

From my perspective, it matters what we do more than what we say. And it mattered we got bin Laden, not what name we called him. I have clearly said we — whether you call it radical jihadism or radical Islamism, I'm happy to say either. I think they mean the same thing.

There's a difference between addressing terrorism as being initiated by radicals within a religion – whether it be Islam or Christianity — but the problem with referring to terrorist acts as "Islamic" or "Christian" is that it doesn't address the fact that not all people who follow that religion are terrorists and that the terrorists carrying out whatever violence are actually acting in contradiction to what the religion actually advocates.

It's important to remember that within any group, there will always be people who are dangerous, who are twisting the intention for their own benefit, or who are using the principles to justify their violence. But these individuals don't, and should not, represent the entire group of which they are a part. As for Muslim groups' association with terrorism, look at the facts: the FBI found that of all terrorist acts on U.S. soil between 1980 and 2005, 94 percent were committed by non-Muslims.