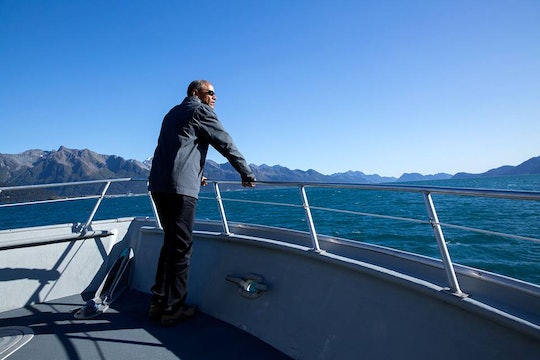 It’s always weird when parents join Facebook. It’s even weirder when a president joins Facebook as a regular 'ole person. Case in point: President Barack Obama just joined Facebook today. Like, for real. While Barack Obama has had an official page since his first campaign for president in 2008, this is his “personal” account. His bio even puts his most important roles first: "Dad, husband, and 44th President of the United States. Comments and messages received through this account may be archived."

Now before you get too excited, I'm willing to bet that POTUS is sending all your pokes and likes directly to the National Security Administration — so watch it. Other than that, POTUS spent his first day on Facebook posting cat videos. Psych. Of course, he took the high road and posted a video about climate change. Ahead of the Paris Climate Change Conference at the end of the month, President Obama is making it very clear how much he wants to tackle environmental issues. Obama wrote that while he plans on posting some “just for fun stuff” on his page, he started his account to address the big issue:

I’m kicking it off by inviting you to take a walk with me in my backyard – something I try to do at the end of the day before I head in for dinner. I say this often, but that’s because it’s always at the front of my mind: We’ve got to preserve this beautiful planet of ours for our kids and grandkids. And that means taking serious steps to address climate change once and for all. Now, we've made a lot of progress to cut carbon pollution here at home, and we're leading the world to take action as well. But we’ve got to do more. In a few weeks, I’m heading to Paris to meet with world leaders about a global agreement to meet this challenge.

I hope you'll join me in speaking out on climate change and educating your friends about why this issue is so important. At a time when nearly three in four adults online use Facebook, this feels like a great place to do it. Share your thoughts in the comments, and pass this message on to folks you think need to see it.

Obama and his team have been active on social media since the beginning. He has been active on Twitter since May and has hosted numerous live Q&As on the web. His first pics on Facebook are him looking pensive on a boat. Here’s hoping he posts more videos of inside the White House. (And doesn’t comment too much on his daughters’ posts. Everyone hates when dads do that.)