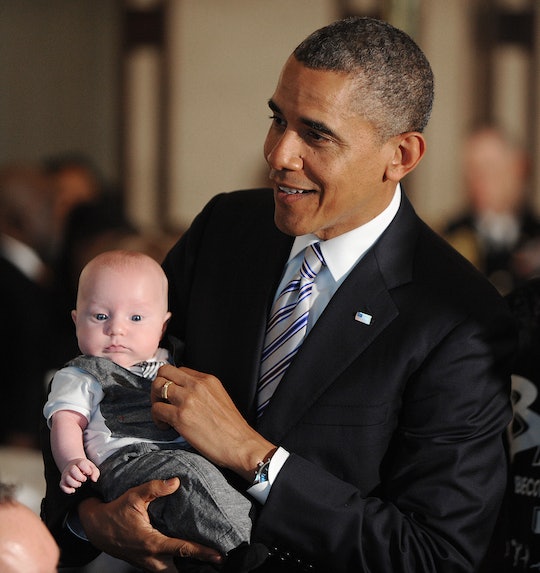 Just in case you've been losing faith in feminism and politics this week, President Obama signed the Babies Act on Friday, making it a requirement that baby changing stations be made available in all bathrooms of public buildings, even the men's room. Because dads need to change diapers, too. It's not much to counteract say, presidential nominees talking about grabbing women by their genitals, but sometimes it's best to focus on the little things. Like men being able to change their own baby's diaper in a public restroom.

The bill is technically called the Bathrooms Accessible in Every Situation Act and it was proposed in April by Rep. David Cicilline (D-Rhode Island) and co-sponsored by 26 other Democrats and one Republican. It was passed with just 34 "nays" this summer (all of the no-votes were Republican, according to the official House archives) and then quickly made it to President Obama's desk. It's not often that the legislation process moves that quickly, but this one was sort of a no brainer.

Just in case you're still feeling low about everything else, here is a picture of Obama with a baby. Because, hey, at least some people in Washington are doing progressive, useful things, however small they might be.

Baby changing stations that are accessible to men are notoriously hard to find. Not only is it inconvenient in real life, it also perpetuates the idea that taking care of an infant is a woman's job. It's not. Dads are parents, too, and they're OK with diaper duty. Ashton Kutcher posted on Facebook about this way back in 2015. "There are NEVER diaper changing stations in mens public restrooms. The first public men's room that I go into that has one gets a free shout out on my FB page!" He also started a Change.org petition asking Target and Costco to add changing stations to their bathrooms.

Both retailers pledged to add diaper changing stations to men's bathrooms in all new stores, which is also a minor victory. Between the Babies Act for public buildings and the overall sentiment shifting in the private sector, men won't have to run around looking for a safe, clean, private place to get down with the diaper.

Even if everything else in politics seems totally out of control, at least there's that.