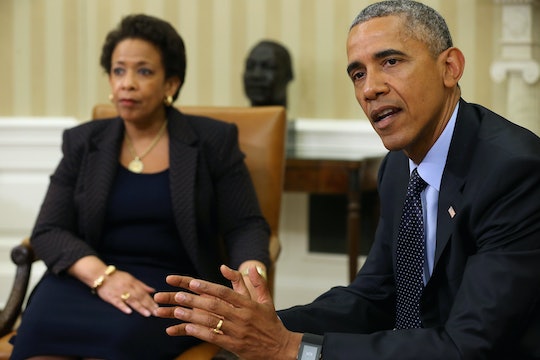 In his weekly address, President Obama shared with the American public one particularly bold New Year's resolution: to tackle gun control in the United States, even if that means he must act on it alone. "So my New Year’s resolution is to move forward on our unfinished business as much as I can," the President said on Friday. "That's especially true for one piece of unfinished business, that’s our epidemic of gun violence." Calling out Congress's inaction on the gun control issue, Obama announced he will meet with Attorney General Loretta Lynch to discuss gun control options on Monday.

The President name-checked both the Sandy Hook Elementary School shooting in Newtown, Connecticut in 2012 and the 2010 Tucson, Arizona shooting that nearly took then-Representative Gabby Giffords' life. The President also cited the Senate's defeat of a sweeping gun control reform bill in the wake of the Newtown shooting that would have expanded background checks for gun buyers — and that had the support of 90 percent of Americans. And yet, the bill failed to pass the Senate. Left with little hope that Congress will act, Obama's taking matters into his own hands by meeting with Lynch to see what he can and can't do about the issue as President.

With a little over a year left in his presidency, Obama's plan to potentially seek executive action on the issue of gun control might appear as an eleventh hour move — but it couldn't come at a time with greater urgency than now. A recent PBS Newshour infographic plotted every mass shooting that happened in 2015 — a staggering 355 shootings, where a mass shooting is defined by four or more people killed or wounded in the shooting, including the shooter.

American support for certain gun control measures remains high. An August 2015 Pew Research Center poll found that 85 percent of Americans favor expanded background checks and 79 percent favor laws to prevent people with mental illnesses from purchasing guns. An astounding 70 percent support the creation of a federal database to track all gun sales. And yet — nothing has changed on a national scale. We've gone from Newtown to Colorado Springs to San Bernadino.

Given Congress's inaction on gun control, it seems as though President Obama has few options left than to seek executive action. Here's hoping that Monday's meeting with the Attorney General can give him a wide berth for finally doing something — anything, at this point, really — about rising gun violence in America.